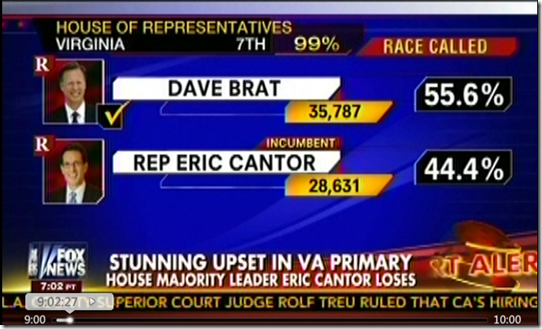 Cantor, the second-most powerful House leader, is the highest-ranking Republican to lose renomination to a Tea Party challenger this year. Brat, an economics professor at Randolph Macon College in Ashland, Va., had been making an issue of Cantor's desire to pass an immigration bill.

In a sign of Tea Party discontent in Cantor's Richmond-based district, activists booed and heckled the Virginia Republican in March.

Cantor, 51, was first elected to Congress in 2001 and became the majority leader in 2011. Heralded as a rising GOP star, Cantor was thought to be on track to become House speaker and he had been trying this year to rebrand Republicans with more outreach to blacks.

Eric Cantor did not just get beaten, he got decimated. It was completely unexpected. Eric Cantor’s internal poll had him 34 points ahead. He lost by 11 points.  That is a 44% swing. It is for this reason that polls must always be taken with a grain of salt.

Americans are in a state of turmoil. 2014 will not follow standard paths of previous midterm elections. It is an example that proves your vote still counts. Your vote still trumps money.