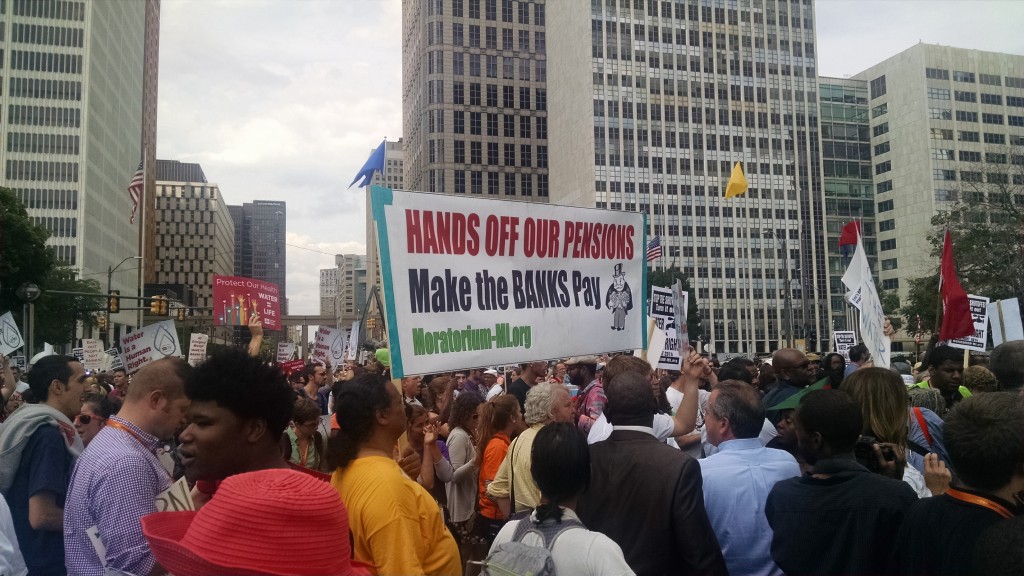 I got to the hotel just before four o’clock. The excitement that is felt just before registration was palpable. I was ready. I am in Detroit.

Flying over Detroit looked like any other city. I was hoping to fly over some of the blight that the traditional media made synonymous with Detroit. It felt like the flight ensured no one saw it. Was that by design?

The week before, from my keyboard in Kingwood I got into an electronic altercation with a Detroit reporter. While watching MSNBC, Detroit reporter Hank Winchester and Detroit activist Maureen Taylor were being interviewed. It turns out the Detroit water department began shutting off the water of all those who are $150 behind in their water bill. They were shutting off the water of the poor, the unemployed, the disabled, and everyone in between at the rate of 3000 per month. Of course, corporation owing thousands were left alone.

The reporter went on MSNBC with a huge dog whistle. While he did state that some people really needed help, he felt it necessary to commit journalistic heresy. He showed his own prejudice. He said the following. “Some of these people have a desperate need,” reporter Hank Winchester said. “They need help from state agencies …. But there are other people and this is where it gets controversial who simply don’t want to pay the water bill, who’d rather spend money on cable.”

When I heard that I immediately stopped writing my current blog, captured the interview, shortened it, and blogged it. Suffice it to say, the blog went viral. Many bloggers in Detroit and elsewhere had a field day with the reporter. He contacted me and accused me of editing the video though I left the context perfectly reflective of what he said.

As I walked from the hotel in Detroit to register, I wondered if this reporter who had no problems getting on MSNBC, would spend the time to cover the large protest that Netroots Nation would participate in with the citizens of Detroit.

After registering I walked back to the Detroit Riverfront. Coincidentally there was a Detroit activist, Michael Doc Holbrook on his bike. Iasked him for a video interview and he obliged. “This is the only city in America,” Michael Doc Holbrook said. “poor people ever had property on the riverfront. And they are taking that away now.” He said Detroit’s real problem is the lack of leadership. Detroit is currently run by an omnipotent emergency manager appointed by the governor. Mr. Holbrook said that Detroit’s emergency manager Kevyn Orr, the governor of Michigan, Rick Snyder, and the Mayor of Michigan, Mike Duggan went to law school together. “You figure it out,” Holbrook said. “How this came to be.” 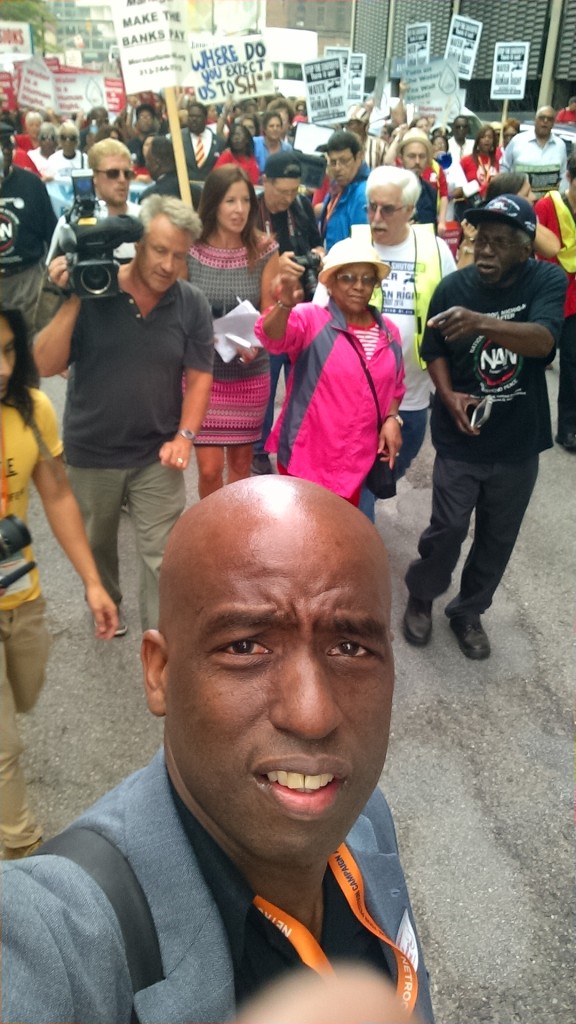 Friday was fast approaching. I made sure I had all my cameras ready. We hoped the rally would be as big as Detroiters told us it would be. They did not disappoint and Netroots Nation did not disappoint. There were clearly over 1000 protestors, in fact given the 3000 Netroots attendees and the hundreds from the city proper, the march seemed closer to 2,000 people. Of course the traditional media claimed 300 people in one report. I have hundreds of pictures to prove otherwise

It was great seeing Reverend Pinkney from Benton Harbor Michigan whose city was being virtually stolen from within by another emergency manager. It was great listening to labor unions, nurses associations, environmental groups, and every other organization coming to support Detroit, a city whose human capital was pilfered. And now the Plutocracy wants it all. It was great talking to a young woman activist, Atpeace Makita, who gave a passionate interview of what needs to be done in Detroit.

What I learned in Detroit was simple. It reconfirmed that our economic system has no heart. Sadly our government that should ensure that a heartless system does not harm is itself controlled by the heartless. The lack of morality is ever present in the way we treat our poor, our needy, and our citizens. It is time that we force our government, we the people, to return to moral policies.