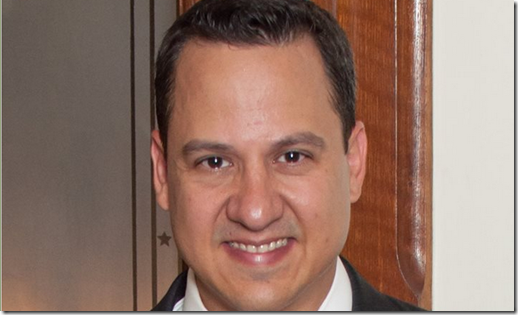 Would this be called poetic justice? There are several clichés here. Specifically, when pointing a finger at someone, generally 3 are pointing back at you. This rather salacious story concerns Jonathan Saenz.

Who is  Jonathan Saenz? Media Matters describes him as “The Anti-Gay Extremist Fighting Houston’s Non-Discrimination Ordinance.”

In keeping with his pattern of assailing LGBT rights as a threat to religious liberty, Saenz championed Arizona’s notorious SB 1062, a law that would have protected business owners who refuse service to LGBT customers, falsely suggesting that the measure was needed to prevent churches from being forced to perform same-sex weddings.

When he’s not working to thwart even basic protections for LGBT people, Saenz promotes a number of tired and ridiculous myths about LGBT people. Saenz has peddled the bogus “slippery slope” argument against marriage equality, arguing that allowing gay and lesbian couples to marry will lead to “polygamy and polyandry” and potentially to people marrying their stepchildren.

He’s also a vocal proponent of harmful ex-gay therapy, which he claims is based on valid science. Indeed, Saenz’s solution to the existence of gay people is to tell them that “it’s never too late” for them to “change.”

Saenz’s fact-free approach to combating LGBT equality is symptomatic of his broader unwillingness to be confronted with facts, evidence, and even lives that don’t comport with his myopic view of the world.

Turns out Jonathan Saenz’s disdain for the LGBT community may have been intensified by his own personal life. It turns out his wife left him for another woman. The entire salacious story is revealed in Texas’ Statewide LGBT News Source, Lone Star Q.

Mere months before Jonathan Saenz became president of the anti-gay group Texas Values, his wife left him for another woman, according to Hays County district court records obtained by Lone Star Q.

Saenz, a devout Catholic, has been a right-wing operative in Texas for many years — working on abortion and religious liberty cases as a staff attorney for the Plano-based Liberty Legal Institute as far back as 2005.

However, it wasn’t until recently that Saenz emerged as one of the state’s best-known — and most extreme — anti-LGBT voices.

Court records indicate that Saenz’s ex-wife, Corrine Morris Rodriguez Saenz, is a member of the LGBT community who was dating another woman when she filed for divorce from Saenz in August 2011.

Like most typical Right Wing Republicans, ideologues like Jonathan Saenz only have empathy or lack thereof when some act or values have some effect positively or negatively on them. This anti-gay extremist found himself much closer to the LGBT world than he could have imagined.