The numbers are starting to trickle in. If one wonders why Republicans are not talking much about the Affordable Care Act, it is because it is working. They cannot use it as a failed experiment because millions are being helped.

Red States Falling behind for refusing Medicaid Expansion to Obamacare 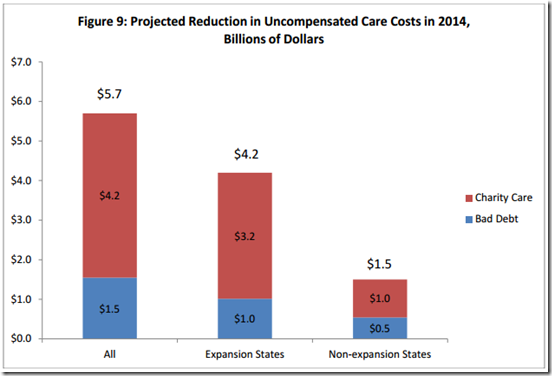 What is most sad is that Republicans’ fixation on trying to get the portions of Obamacare they control to fail is hurting their own citizens. It is costing their hospitals and businesses money. The numbers reflect that reality.

One must ask why these Red States continue to vote for Republicans who cause them financial and health harm. There is already ample data that shows that Red States are more dependent on government. Yet Red State Republicans fight an increase in minimum wage which would take many out of poverty even as it improves the economy for most.

This report published last week revealed  the following as stated by the HHS press office.

For over a decade prior to the Affordable Care Act, the percentage of the American population that was uninsured had been growing steadily.  But with the significant expansion of coverage under the health care law through the Health Insurance Marketplace and Medicaid, the uninsurance rate is at historic lows.  As a result, the volume of uncompensated care provided in hospitals and emergency departments has fallen substantially in the last year, particularly in Medicaid expansion states.

“Hospitals have long been on the front lines of caring for the uninsured, who often cannot pay the full costs of their care,” said HHS Secretary M. Sylvia Burwell. “Today’s news is good for families, businesses, and taxpayers alike.  It’s yet another example of how the Affordable Care Act is working in terms of affordability, access, and quality.”

Medicaid expansion continues to help an unprecedented number of Americans access health coverage, many for the very first time.  According to a recent report, as of July, nearly 8 million additional individuals are now enrolled in Medicaid and the Children’s Health Insurance Program (CHIP), compared to before open enrollment in the Marketplace began in October 2013.

Because of the Affordable Care Act, states have new opportunities to expand Medicaid coverage to individuals with family incomes at or below 133 percent of the federal poverty level (generally $31,322 for a family of four in 2013). This expansion includes non-elderly adults without dependent children, who have not previously been eligible for Medicaid in most states. Twenty-eight states, including the District of Columbia have expanded Medicaid under the Affordable Care Act.