Why is this story not national news? Sadly as I have written several times, the news coverage of the the Wendy Davis vs Greg Abbott campaign has been biased against Democrats. This is the case throughout the country. Can you imagine what the news reports would look like if Wendy Davis was in a picture with this guy?

Is Greg Abbott palling around with terrorists? 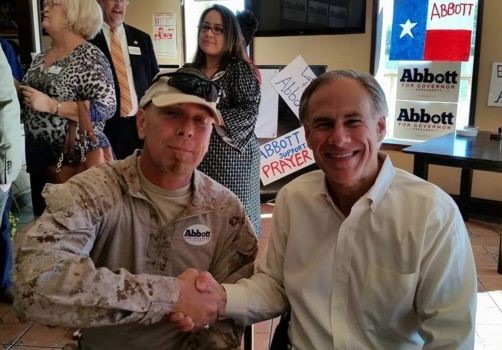 FORT WORTH - Senator Wendy Davis issued the following statement after Greg Abbott refused to denounce a radical fringe group after meeting with its leader days before he was arrested by federal authorities:

"It's deeply disturbing that Greg Abbott is refusing to denounce this radical fringe group after meeting with its leader days before he was arrested with the same kinds of explosives from the Oklahoma City bombing in his hotel room.  Mr. Abbott's refusal to disclose what they discussed or condemn this group shows a frightening lack of judgment from someone who wants to be our governor."

"On Wednesday, Chasse declined to say whether Abbott supports the group."

The photo, taken at Brownsville restaurant Cobbleheads on Oct. 16, shows Massey wearing an "Abbott for Governor" sticker on his military fatigues and shaking hands with the smiling candidate.

Video footage captured by Fox 2 News in Brownsville also shows Massey taking photos of Abbott while wearing a GoPro camera on his head, which was later confiscated during the raid.

Massey posted another photo of himself and Abbott at the event on his Facebook profile - since deleted, but snagged by ValleyCentral.com - with the caption, "Trying to talk to Greg Abbott about the border problems. I gave him my number we will see if he calls."

Abbott deputy communications director Amelia Chasse said Abbott and his campaign did not know who Massey was when the candidate posed with the militia member. She declined to comment whether Massey posed a security threat to Abbott.

"This individual was part of a photo line at a public event and Greg Abbott took a photo with everyone who was in the line at that event," Chasse said, adding the two exchanged only "pleasantries" during their brief encounter.

Agents with the federal Bureau of Alcohol, Tobacco, Firearms and Explosives, who searched Massey's hotel room in Brownsville after an Oct. 20 arrest, found an AK-47 with six loaded magazines, a loaded handgun, a ballistic helmet and several cameras, as well as an ammunition box filled with suspected ammonium nitrate - which can cause major explosions - and fuel, according to court documents obtained by the San Antonio Express-News.

On Wednesday, Chasse declined to say whether Abbott supports the group.

"Greg Abbott places his trust in the Department of Public Safety, border sheriffs, the National Guard and local law enforcement to do the job necessary to keep Texans safe," Chasse said.

The campaign did not immediately respond to a follow-up question regarding whether Abbott, an avid gun rights advocate, is concerned that some militia members are allegedly patrolling the border with weapons that, under federal, they are prohibited from carrying.

In July, The Texas Democratic Congressional Delegation, including U.S. Rep. Joaquin Castro of San Antonio, called on Abbott to denounce militia groups at the border. At the time, Abbott spokeswoman Lauren Bean called the move a "partisan political stunt."

Massey was arrested in connection to an Aug. 29 incident during which a Border Patrol agent fired four shots at a man pointing a weapon at the agent near the Rio Grande while pursuing a group of immigrants east of Brownsville, according to documents from the U.S. District Court for the Southern District of Texas in Brownsville.

During the incident, agents seized a pistol from the man, identified as militia member John Frederick Foerster, and two firearms - a pistol and rifle - carried by Massey, who was in the vicinity with another militia member.

Foerster, who was arrested Oct. 21, and Massey have each committed prior felonies, which prohibits them from carrying firearms under federal law. Both have been charged with possession of a firearm by a convicted felon, a class C felony punishable by up to 10 years in prison.

Massey was sentenced to five years in prison for felony burglary in Dallas County in 1988, court records show. That incident revoked his probation from an 1985 arrest of another burglary charge.

Foerster pleaded guilty to all three charges in May 2001 and served part of his sentence in Cameron County before being transferred to the Texas Department of Criminal Justice on Aug. 1, 2001.

Ammonium nitrate has massive explosive power under certain circumstances: a stockpile of the substance at a fertilizer plant in West caused the April 17 explosion that killed 15 people and injured more than 160 others and the substance was also used by Timothy McVeigh in the 1995 Oklahoma City bombing that killed 168 people.