Baby Boomers have much to atone for. 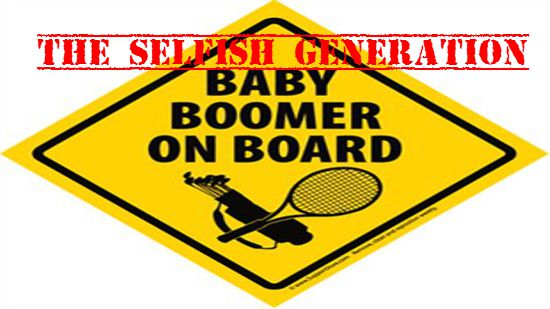 Last year I wrote an article titled ‘Boomers Must Take Some Blame And Help Fix Generation Y Unhappy Problem‘. The article got a lot of flak from fellow boomers who said it was inciting conflict between generations.

The letter had some rather salient points that both Republicans and Democrats should heed. Read it. The last paragraph was a plea asking that millenials, GenXs, GenYs and all others be not taken for granted.

President Obama hit the nail on the head – we won’t show up and vote for you if you aren’t offering us anything real. If Democrats want to stay relevant, they’ll have to learn to stop taking us for granted and actually make an effort to get our votes. Simply banking on being the lesser evil and having that be enough won’t cut it any longer.

Gibson was much too kind in his essay. He slammed the Democratic Party for not running on any message that relieved the angst of young people. He needed to open the eyes of those baby boomers who voted for politicians representing austerity and small government. He needed to call them out for there propensity for unadulterated selfishness.

After all, baby boomers were beneficiaries of a society where their elders paid more taxes to support a robust GI Bill, low cost education, an infrastructure that was the envy of the world, and much more. Now that many have realized the benefits of that Great Society, they balk when it is time to pay it forward.

They created debunked fallacies to justify their selfishness. Supply side economics (trickle-down economics) does not work. Lowering taxes do not create more jobs or enrich the masses. Increasing the minimum wage does not cost jobs. How do we know they do not work? It is what we have been doing for north of thirty years. The result is a declining middle class and an exploding income and wealth disparity.

Carl Gibson was a guest on my show Politics Done Right on KPFT.