The battle between ‘good’ and evil is on. It seems ‘good’ is winning for a change. A few days ago the Missouri KKK sent out a flyer telling Ferguson Missouri protesters that they had “awaken a sleeping giant.” The KKK said in the flyer that they “will use lethal force as provided under Missouri Law to defend ourselves.” Thy end the flyer with “You have been warned by the Ku Klux Klan. There will be consequences for your acts of violence against peaceful, law abiding citizens of Missouri.”

The KKK threats intimidated no one. Protesters continued their fight against a system that exonerated Darren Wilson, the police office that executed Michael Brown a few months back. 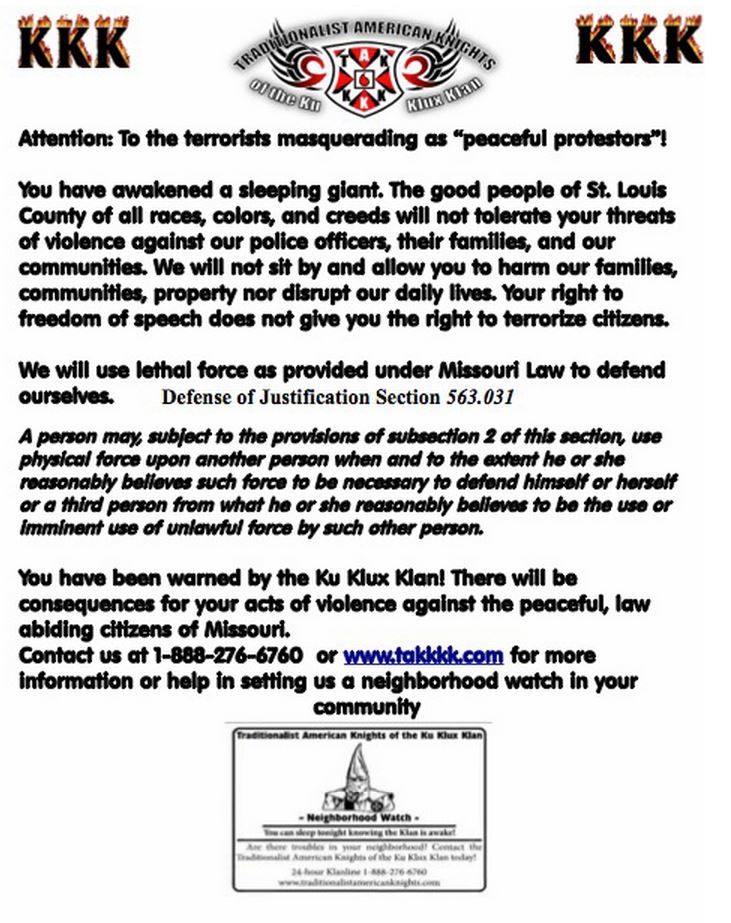 A faction of Anonymous decided to get involved. It began operation #OpKKK. It took over several Missouri KKK online accounts.

Anonymous began disclosing the identities of Klansmen and even seized control of the Klan’s most important Twitter account. The Klan responded by claiming they weren’t violent, threatening Anonymous with violence, and saying the people being identified as Klansmen weren’t really Klansmen (even when there were photos of those members wearing the famous white sheets of the Klan).

As Anonymous started releasing Imperial Wizard Frank Ancona’s sensitive personal information and threatened to release identities of their members, the tone has changed. While initially he belittled Anonymous for their actions he is doing so no more. He has been in direct contact attempting to appear as a victim. He is even implying that the KKK and Anonymous should be on the same side fighting the government. After-all he said the KKK of today is not racist he says.

It is evident that the KKK and Frank Ancona are backtracking because of the fear that Anonymous will disclose the name of some citizens that will be embarrassed for their association. They are unwinding a web that may include actual law enforcement associations with the KKK.