Police executed them all 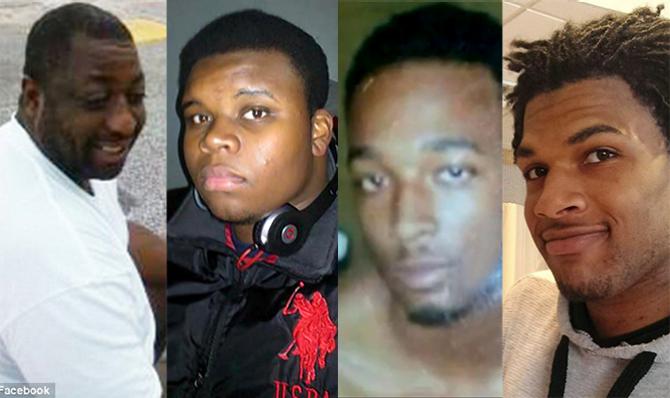 Many are attempting to change the subject. The orchestration of a narrative change is in full vogue. It started from the beginning. There was no way the powers that be would allow Michael Brown’s death to define a movement against a systemic problem in policing that views non-whiteness as a card to deny a suspect the benefit of the doubt.

In a country polarized by two political Parties supposedly on different ends of socio-economic justice, reaction to police officer Darren Wilson’s execution of teenager Michael Brown was disappointing on many counts.

Missouri Governor Jay Nixon is a Democrat. Yet he came out in full force military modal against the aggrieved in Ferguson. St. Louis County Prosecuting Attorney Robert McCulloch is a Democrat, yet he went into that grand jury room and coerced a non-indictment by dismissing the testimony of those who legitimately witnessed the execution of Michael Brown. He went out of his way to give Officer Darren Wilson presence, reliability, and trustworthiness even as his story was incredulous.

Five members of the St. Louis Rams came out with their hands up to show solidarity with the community grieving over the continued attack on black men by some in law enforcement. The St. Louis Police Officers Association soon after released a statement condemning the St. Louis Rams football players. Ex-Democratic Representative and Business Manager Jeff Roorda decided to display an uncanny false sense of being aggrieved. KMOX reported it this way.

The association says the five players who stood with their hands raised before Sunday’s game should be disciplined and the NFL should publicly apologize.

Business manager of the union Jeff Roorda says he was personally offended, and soon found out he wasn’t alone.

“As soon as this happened yesterday, my phone was blowing up with calls from our members,” he says. “Yesterday evening, I was getting calls from friends in law enforcement from across the country.”

On Monday afternoon Roorda met with Rams’ management to voice his concerns.

“This ‘Hands Up, Don’t Shoot’ gesture implies that Officer Wilson gunned down a young man in cold blood who was attempting to peacefully surrender, and that’s just not…not what we know now,” Roorda explained to KMOX’s Mark Reardon.

Earlier Monday, Roorda told KMOX hosts John Hancock and Michael Kelley the Rams receivers who raised their hands at least owe his members an explanation, if not an apology for their actions.

Last Sunday, Right Wing Conservative Rich Lowry went on Meet The Press with Chuck Todd and said the following. “What I really object to is you can discuss all these problems, but let’s not pretend that this particular incident was something it wasn’t,” Rich Lowry said. “If you look at the most credible evidence, the lessons are really basic. Don’t rob a convenience store. Don’t fight a policeman when he stops you and try to take his gun. And when he yells at you to stop with his gun drawn, just stop, and none of this would’ve happened.”

Rudy Giuliani appeared on several networks including MSNBC with his racist attack aimed at dehumanizing Michael Brown specifically and Black people in general. He used statistics on Black on Black crime that is easily dispelled by Matthew Yglesias’ piece titled “White-on-white murder in America is out of control” when full context is applied.

The narrative is rapidly changing. It went from the officer gunning down an unarmed teenager to an officer having to defend himself from a large black charging demon by killing, exterminating the threat. Not lost to those who know the truth is that the shooting and killing of Black men by cop continued even as the narrative changed.

We should all remember that political parties do not have have not had the back of the aggrieved except for political gain. To many the police is but a heavy arm to keep some in their places even as they are needed for protection.

What does all of this mean? It means it is time for American political and socio-economic activists to be completely engaged. The Eric Garner and the past Rodney King non-indictments prove that cameras and videos are not enough. The cancer within the police departments are but the metastasis of the cancer within society. It is that societal cancer that must be eradicated. Anything short of that is unsustainable.

It is important that the aggrieved and their allies enforce the dream of America. It is up to activists to not let time be a release pressure valve lest nothing changes. It is time to stay firm and demand that police act like police and politicians serve us all by ensuring all of law enforcement treat us all equally well.