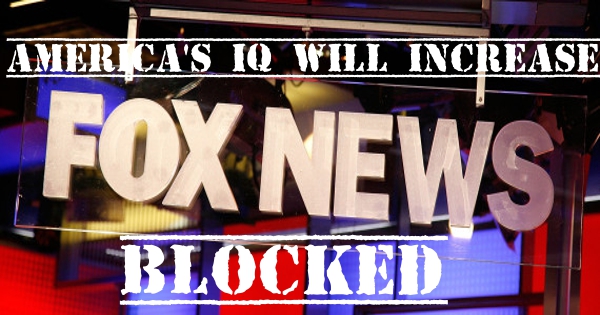 Fox News is in a fight with Dish Network. Dish Network has over 14 million customers. As of the date of this post these viewers continue to be blocked from receiving Fox News. America's aggregate IQ should increase over the next few days or however long the blackout lasts.

No one is sure how long this blackout will last. No one expected Viacom's network Comedy Central to be gone permanently from SuddenLink cable channels. Yet SuddenLink replaced the dropped the Viacom programs. Viacom is now helping SuddenLink subscribers switch providers.

ENGLEWOOD, Colo.--(BUSINESS WIRE)--Tonight, 21st Century Fox, Inc. (NASDAQ: FOXA, FOX) blocked DISH customer access to Fox News Channel and Fox Business Network, as the media conglomerate introduced other channels into negotiations despite those channels not being included in the contract up for renewal.

“It’s like we’re about to close on a house and the realtor is trying to make us buy a new car as well,” said Warren Schlichting, DISH senior vice president of programming. “Fox blacked out two of its news channels, using them as leverage to triple rates on sports and entertainment channels that are not in this contract.”

This service disruption comes despite DISH’s offer of a short-term contract extension that would preserve the channels as the two parties continue to negotiate.

“DISH has had a productive relationship with Fox for many years,” added Schlichting. “We regret the service disruption to our customers, and remain committed to reaching an agreement that promptly returns this content to DISH’s programming lineup.

Dish Network has setup a website attempting to keep its customers abreast of the situation urging them to stay. They say swithcing is not the answer. Fox News is doing the same at a website they have setup. They are encouraging Dish Network's customers to either switch or pressure the company.

Reaction from Fox News viewers on the Fox News Facebook page is amusing but sad. It shows why a withdrawal from Fox News cannot but help one's IQ. It seems the survey conducted by the Program on International Policy Attitudes at the University of Maryland still holds true.

One can only hope the blackout lasts long enough for the methadone to work.