Muslims in Oslo Norway form a “ring of peace” around synagogue

Once a narrative takes hold in America it become hard to dislodged. The story of Muslims forming a “ring of peace” around a synagogue is proof positive. There was but a slight mention of this event in the traditional mainstream media.

My Jewish friend Ian Reifowitz wrote about the event this way at the DailyKOS. 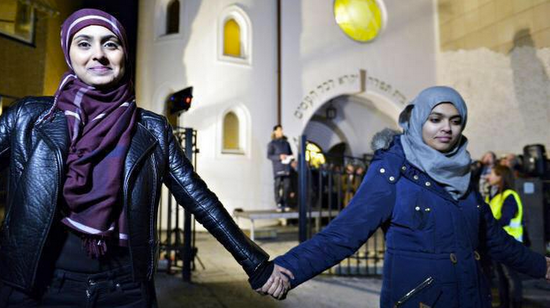 That is a beautiful image. Over the weekend, more than 1000 Muslims gathered to form a ring of peace around a synagogue in Oslo, Norway. They both offered a human shield—in the best sense of the term—protecting one of the most visibly Jewish locations in their city, and condemned the murder last week of Dan Uzan, a Danish Jew, at a Copenhagen synagogue. That murder was committed by Omar El-Hussein, a Danish-born son of Palestinian immigrants, as part of an attack that also included shooting up a forum discussing free speech that featured Lars Vilks, who has been the subject of death threats and even assassination plots for having published cartoon depictions of the Prophet Muhammad. Although Vilks escaped unharmed, one person attending the forum died. El-Hussein was pursued, shot, and killed by Danish police.

These Oslo Muslims brought a message of peace and tolerance, one that rejects hate. They chanted: “No to anti-Semitism, no to Islamophobia.” Zeeshan Abdullah, who helped organize the event, told the Muslims and Jews gathered together outside the synagogue:

“Humanity is one and we are here to demonstrate that. There are many more peace mongers than warmongers. There’s still hope for humanity, for peace and love, across religious differences and backgrounds.”

An Al-Qaeda Somali militant group, Al-Shabaab has threatened the Mall of America in Minnesota among others. This is news that should be out there but in the grand scheme the Al-Shabaab terrorist threat is so far imagined only. The murderous massacres at our local venues (theaters and malls) and schools have been realized with many more deaths from non-Muslims. We should always be on our guard giving today’s reality of violence both from foreign and domestic sources.

This imbalance in reporting as well as misguided utterances from those with a platform has made average Muslim citizens targets of hate. Muslims fear that anytime some massacres occur, as a people, they would be suspects.

This is the case because the good deeds that occur like the “ring of peace” get little coverage. Public appreciation of their collective humanity remains virtually invisible. Americans simply see them in the context of being harmful or dangerous.

A friend of Coffee Party USA, Michael Charney wrote a brilliant piece worth reading titled “The New Terrorism” that put some of these concerns into context on several other issues. It is evident the unfair or simply wrong narratives will not be dislodged by the traditional mainstream media. It is up to us. We must use our own media, social media to inform our brothers, sisters, friends, and families. Share good information. Force the derelict media to shape up or become irrelevant.