Gallup released a new study that is amazing. Two states that had the biggest drop in the uninsured rates of its citizens were Red States. Which Red States? Arkansas and Kentucky. 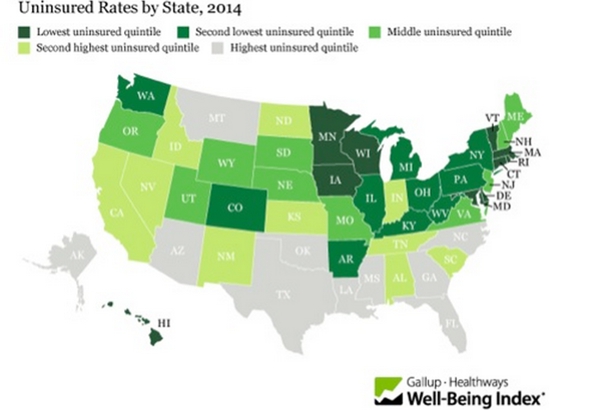 The following table is rather revealing. The states with the largest decline in the uninsured are the ones that accepted the Medicaid Expansion to Obamacare. 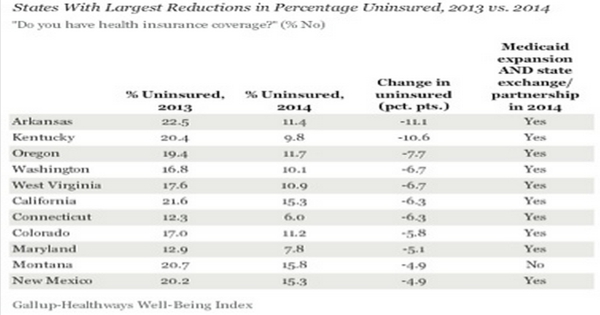 The state that claims itself as an economic miracle is dead last in securing healthcare insurance for its citizens. Texas has the highest uninsured rate in the country by a long shot. The Texas Hospital Association immediately sent out a press release that included the following after the Gallup report came out.

AUSTIN, Texas—(Feb. 24, 2015) Texas continues to have the highest percentage of residents without health insurance, according to the Gallup-Healthways Well-Being Index. At the end of 2014, 24.4 percent of Texans had no health insurance.

Nationwide, the rate of uninsured continues to decline. Between 2013 and 2014, it fell more than three percentage points to 13.8 percent, the lowest annualized rate across the seven years of Well-Being Index measurement.

Texas, however, continues to lead the nation in its rate of uninsured in large part because the state has rejected new federal funds to develop its own solution to provide greater access to affordable private health insurance for low-wage working Texans. Hospitals and other health care providers, employers, the privately insured and property taxpayers bear the costs of health care services for the uninsured.

Republican governors and legislators that are denying their citizens the ability to get affordable healthcare by accepting the Medicaid Expansion to the Affordable Care Act (Obamacare) are sentencing many of their constituents to death. Moreover they are squandering their taxpayer dollars as healthcare dollars that their states have paid to the federal government are not returned to provide healthcare to their citizens. The economic impact is unrecoverable as long as their ideological intransigence remains.