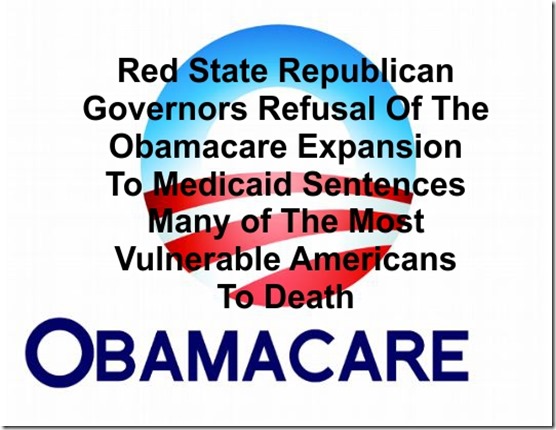 Red State Republican governors must be ashamed of themselves. They have allowed their hate for everything Obama to obstruct real humane and moral values. They have sentenced approximately five million of their residents, their constituents, Americans, to potential death by neglect. It cannot be define in any other manner.

It is fiscally irresponsible to refuse the Medicaid Expansion citizens paid for.

The traditional media have been reporting on the less than perfect roll out of Obamacare ad nauseam. Most Red State governors have opted out of the Medicaid expansion to Obamacare. What they have failed to report effectively is the number of Americans these Republican governors are leaving stranded.

These Republican governors are leaving their most vulnerable constituents without the reliability of healthcare their states are already paying for. States cannot opt out of the myriad of taxes that fund Obamacare. As such this is a fiscally irresponsible act. It is morally reprehensible.

Texas governor Rick Perry is the most severe offender. His state accounts for more than one fifth of all the uninsured that will suffer from this intransigence and moral depravity. He lies even as there are accounts of his citizens dying from lack of insurance or access to the Medicaid expansion.

How does any of these governors sleep at night with stories like these?

Shelagh Collins of Pittsburgh can get primary care at a federally funded community health center nearby, but she can't afford more specialized treatment for her joint aches and pains that limit her ability to do certain jobs, she said. After she fell and hurt her hip in the spring, she couldn't pay for an MRI, she said. …

Lori Miller would like to see a doctor for the headaches, blackouts and weakness that has made it hard for the Punxsutawney seamstress to pursue more work. The 34-year-old wonders what happened to the physically fit woman who used to walk, run or bicycle every day, and she wonders if she's still suffering from a painful bicycle accident two years ago for which she never sought treatment.

The plight of these Americans can be inferred throughout the country. Sadly, they are likely the minor ones. There are millions who know  they are sick, who feel sick, that will die from this neglect. They will die from their governors’ refusal to accept the Medicaid expansion to Obamacare.

A person that is drunk and unaware of what they are doing can be convicted of involuntary manslaughter. These governors are smart enough to know the effects of their actions. Is this then not voluntary manslaughter for all those that will die, that could otherwise have been saved had the expansion to Medicare been enacted in their states?