Unless Hillary Clinton moves left she will not win 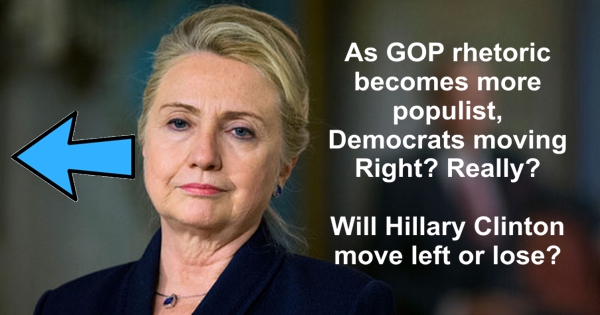 This morning I read The Hill article “Centrist Dems ready strike against Warren wing” and almost pulled out all the hair I do not have on my head. Rather than pulling skin till it bled, I decided to write this piece instead of the piece I really wanted to write this morning. I will do that later.

The Hill piece starts as follows.

Centrist Democrats are gathering their forces to fight back against the “Elizabeth Warren wing” of their party, fearing a sharp turn to the left could prove disastrous in the 2016 elections.

It is as if they believe that the Democratic Party’s sharp turn to the right was a centrist move. The reason many Liberals and Progressives have been clamoring for Elizabeth Warren is because of her populist economic message. After being screwed by Wall Street and government policies that allowed them to rip us all off, Progressives and Liberals know it is a message they can sell to Americans, a message that engages Americans. It is not that much different than the Obama message of 2008 that brought hope and a landslide.

So what are these Centrist Democrats doing?

The New Democrat Coalition (NDC), a caucus of moderate Democrats in the House, plans to unveil an economic policy platform as soon as this week in an attempt to chart a different course.

“I have great respect for Sen. Warren — she’s a tremendous leader,” said Rep. Scott Peters (D-Calif.), one of the members working on the policy proposal. “My own preference is to create a message without bashing businesses or workers, [the latter of which] happens on the other side.”

What the hell does this mean? The Right does the dirty work of Wall Street and the Plutocracy. They bash workers and malign unions.The difference is they have attained success in actually crippling unions which has mirrored the decline of American wages. Being centered now accepts the current position as a norm. We consolidate on the current state of American lost wages, lost union power, lost wealth, and lost income just to be nice. We fail to acknowledge that the birthright of most Americans have been stolen with our tacit approval.

I was surprised to see this statement from Governor Howard Dean.

Democracy For America founder Howard Dean, who has backed Clinton for president, said Warren is “right on policy, but the rhetoric needs to be toned down.”

“Our program cannot be soak the rich — that’s a mistake and alienates middle class people. But on substance, the Warren wing is correct,” said Dean

To be blunt, Governor Dean must have been drinking. That was a stupid statement. In effect he is calling Americans dumb. If we articulate the message to Americans with one voice there is no risk that middle-class America will assume ‘recovering what was stolen from them’ some how means we are going to tax the middle class.

I went to the DailyKOS Texas KOS meet-up in Austin where we discussed many of these issues. Many people had their hopes on Elizabeth Warren because they knew they could sell her populist economic message. Most are resigned to support Hillary Clinton because she seem to have the gravitational pull of the party. Additionally one of the DailyKOS’ contributing editors made a salient point. We know and love Elizabeth Warren’s economic message. We do not however know much more about her policies on a myriad of other issues. Hillary Clinton is a known entity on most of these issues.

The portion of middle-class America that are opened to persuasion needs a compelling message they can believe. They know that trickle-down economics has decimated them. Suggesting that trickle-down lite will somehow work for them will not sell. They will stay home.

Americans know something is wrong,. They do not exactly know what is wrong. They are not economists. They are not dumb either. Democrats must ensure their messages include a large component of education that allow Americans to make up their own minds. They simply need to be truthful. They must illustrate that the system is rigged.

What is amazing is that many Republican potential presidential candidates are now running with the income inequality and other populist messages. The Democrats will lose if they do not move left. Hell, President Obama acknowledged that Republicans are moving left, becoming more populist even if they are doing so via rhetoric only. We must not allow Centrists Wall Street Plutocratic water carrying Democrats to move the party or any party into a position that hurts the middle-class. Any move other than leftward is a move towards defeat.