These states’ citizens will suffer if Supreme Court cripples Obamacare 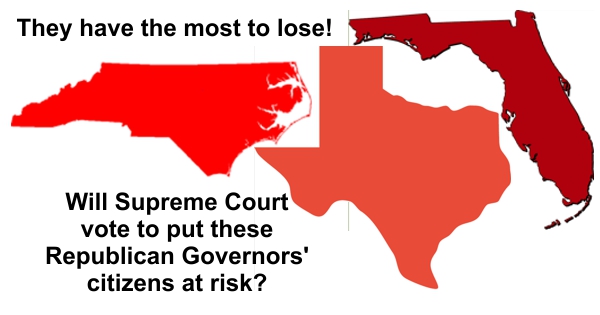 Chuck Todd and Meet The Press finally came clean on Obamacare albeit less stinging to Republican failures as it should have been. He started the piece noting that the Supreme Court case, King v. Burwell, could severely damage the law.

The Wall Street Journal reported the following reality that should give Texas, Florida, and North Carolina, and every red state without a health insurance exchange pause on their anti Obamacare stance.

Florida, North Carolina and Texas would be among the states hardest hit if their health-insurance subsidies are struck down by the Supreme Court. Those states had the highest number of consumers who were eligible for tax credits when selecting a plan on the federal HealthCare.gov website, government data show. …

In Florida, about 1.6 million people who picked a plan on the federal site were eligible for financial assistance, according to the new report. In Texas, more than one million were eligible; in North Carolina, more than 550,000; and in Pennsylvania, more than 430,000.

If the Supreme Court rules against Obamacare Republican governors and legislatures will have a lot to answer for. It will be a direct financial hit on millions of their constituents.

These governors fight valiantly for the subsidies of oil companies and other corporations yet they support denying their own citizens subsidies for life saving health care? These governors will have to decide which is more important, their failed ideology or the well-being of their citizens.