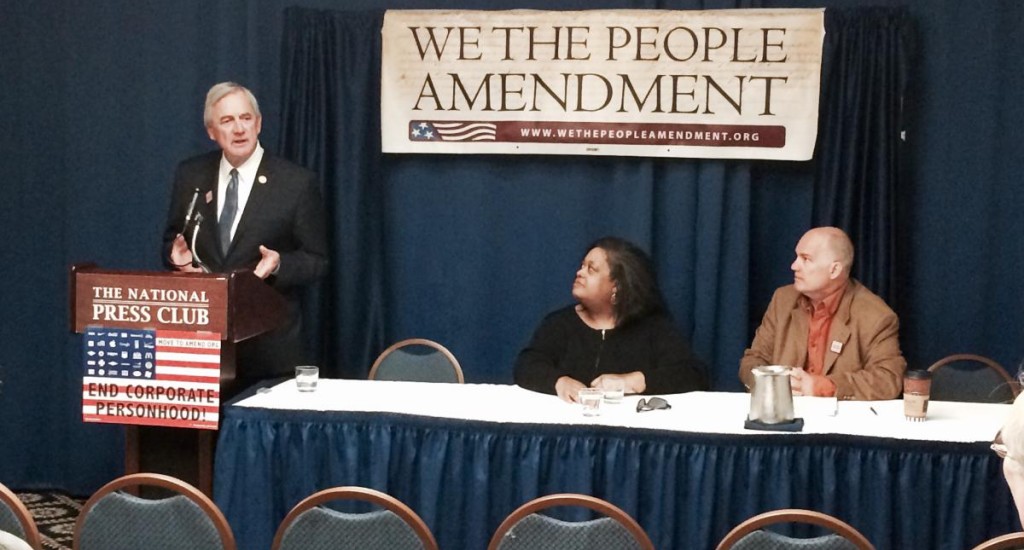 To be clear, America was never a democracy. One man one vote (one person one vote) was never an implicit reality. Any reading of Federalist 10 makes that patently clear. Why? Ultimately the powers then and today’s plutocracy realized that it would change the social and economic order based on a real meritocracy, compromises, and the hard work of selling many ideas. You see an idea that benefits a few would never fly from an enlightened populace.

As Americans were becoming more liberal and enlightened they demanded democracy, social democracy and economic democracy. The plutocracy would have none of that. We are living through an implemented Powell Manifesto that has in effect dumbed down the population by infiltrating news media and schools as it decimates unions and liberal values.

The Move to Amend coalition was formed outside of the Beltway in Marin, California, in 2009 in preparation for the Supreme Court’s 2010 Citizens United v. Federal Election Commission decision. The coalition, which now boasts nearly 380,000 people and thousands of organizations, has helped to pass over 600 resolutions in municipalities and local governments across the country, calling on the state and federal governments to adopt the amendment below. Interestingly these resolutions passed irrespective of the demographics, ideologies, or party affiliations of the voters.

The following short Move to Amend documentary puts much of it into context.

It is obvious that America will only be a democracy when one person one vote is instituted and inalienable rights are reserved for persons and not artificial entities (corporations, etc.).

We The People Amendment introduced to Congress

Last week Move to Amend’s We the People Amendment, House Joint Resolution 48) was introduced in the 114th Congress. It was announced at the the National Press Club.

(Washington D.C.) – The movement for constitutional reforms that would end what organizers call “corporate rule” has arrived in the chambers of Congress. This morning, members of the U.S. House of Representatives joined Move to Amend by announcing their sponsorship of the “We the People Amendment” (House Joint Resolution 48), which clearly and unequivocally states that:

Rights recognized under the Constitution belong to human beings only, and not to government-created artificial legal entities such as corporations and limited liability companies; and
Political campaign spending is not a form of speech protected under the First Amendment.In making the announcement, lead sponsor Rep. Rick Nolan (DFL-Minnesota), said: “It’s time to take the shaping and molding of public policy out of corporate boardrooms, away from the corporate lobbyists, and put it back in city halls – back with county boards and state legislatures – and back in the Congress where it belongs.”

We The People Amendment received excellent coverage from the independent media

David Cobb was the guest on Thom Hartmann’s on RT Television on April 29. He spoke about Move to Amend and the amendment in great detail.

He appeared on Redacted Tonight hosted by Lee Camp on April 30th.

David Cobb and George Friday also guested on Act Out! hosted by Eleanor Goldfield on Occupy.com.

It should be noted that none of these can be considered traditional mainstream media. It is specifically for this reason why the amendment is needed.

This amendment is not an easy proposition. Its submission is just the beginning of a process that will be ongoing for years. Americans must be made aware of the process. Americans must be made to feel self-empowered in order to multiply themselves in every community, in every corner of this vast country. It will take a real broad-based movement where all communities feel they have a reason to be involved. All communities must see that it is a benefit for all.