Bobby Jindal thinks America is yearning to be Louisiana

Bobby Jindal appeared on ThisWeek with George Stephanopoulos. Jindal is likely the most delusional potential candidate running to date. What is amazing is the conviction with which he articulates a false narrative and a false state of the economy in his state, Louisiana.

George Stephanopoulos told Bobby Jindal that the Rand Paul team responded to his criticism of his foreign policy by saying Jindal is a flip-flopper on Common Core and that he cratered Louisiana’s economy.

“We have cut our budget,” Bobby Jindal said. “We measure our success by the success of our people not by the success of government. We’ve cut our budget twenty six percent, over thirty thousand fewer state government employees. Our economy has grown twice as fast as the national economy. Three times as fast job creation.” He then went on to say that America does not need another one term senator as president.

The miserable state of the economy in Louisiana was pointed out on Meet the Press a few months ago. In fact the following chart is probative. 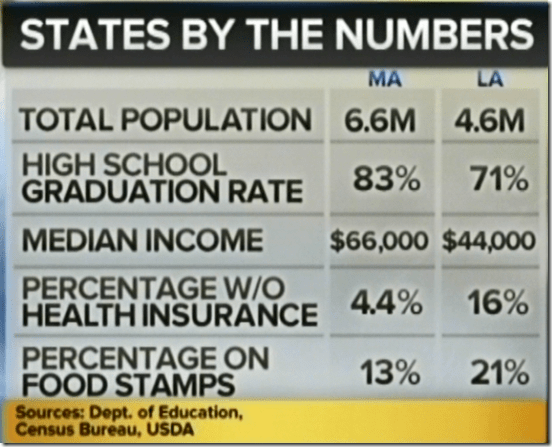 Louisiana’s travails are particularly problematic because they have been caused in large part by Jindal’s tax cuts, which, along with declining oil revenue, blew such a hole in the state budget that even huge spending cuts haven’t made up the gap. In the last few days, articles in the New York Times and Politico have detailed Louisiana’s fiscal travails, including a possible 40 percent operating-budget cut at Louisiana State University and an increase in tuition at public universities of 90 percent during Jindal’s time in office. Jindal has already raided state reserve funds and resorted to the sort of budget-keeping gimmicks that he once criticized.

Rod Dreher of the American Conservative wrote the following.

I keep telling my friends in the national media that if you think Bobby Jindal has a chance in hell of becoming president, send a reporter down to spend a few days in Louisiana, seeing what condition he’s leaving his state in. In today’s NYT, Campbell Robertson tells the country about the current mess. …

Republicans say the same thing: that Jindal is sacking his own state to preserve his viability as a Republican presidential candidate — specifically, so he can say that he never raised taxes, but rather cut them. Even Quin Hillyer, the conservative columnist for the Advocate, thinks the state’s tax policy, under which the poor pay a greater percentage of their income in taxes than the rich, is a “moral abomination.”

Additionally Bobby Jindal is ensuring many of his citizens will die prematurely by not accepting the Medicaid Expansion to the Affordable Care Act. This immoral act is being done in order to maintain an ideological purity demanded by a a few in his party.

Why is a failed governor with a provable disastrous record of the economic and health well-being of his citizens given a national platform. There are many other politicians whose presence would enhance America’s body politic. Yet they never get the opportunity to do so.