Joseph Stiglitz: It’s Time to Get Radical on Inequality

Joseph Stiglitz was recently interviewed by The Institute of New Economic Thinking. The snippet above highlights some of the most important points.

Nobel laureate Stiglitz, author of The Price of Inequality and The Great Divide, studies the forces driving inequality and what is at stake if it continues. In his view, bad economic thinking deserves part of the blame — fanciful ideas like trickle-down and the notion that economists should try to increase the size of the economic pie and let the politicians worry about distribution. On the contrary, Stiglitz sees distribution as a problem economists must confront. He warns that an economic system that doesn’t raise standards of living for most Americans is a failure.

Stiglitz departs from Thomas Piketty on the causes of inequality and sees capital gains on land and rents associated with monopoly power, discrimination, and exploitation as the big story. He also faults deregulation in the banking industry.

Stiglitz warns that inequality and unfairness are undermining our identity as Americans, destroying our society, and harming the economy. It’s time, he says, to get radical. We have to understand that mild tweaking won’t work and that we must take on the underlying and power structures if we hope to tackle this enormous challenge. Watch the video to learn more about how to do this.

One of the most important points Stiglitz made should rid everyone that currently attempts to protect the wealthy from rightful and moral redistribution of their ill-gained wealth. The wealth by most was not gained by hard work but instead by ownership of capitalized exploitative rents. This concept must be understood. Most of the wealthy used our defective economic system to profit at the expense of the masses. It is all in the numbers many know and the economic reality most exist in.

Yes. It is time to get radical. Radical means electing real progressives that will remake the economy into one that serves us all and remove the monopoly power of corporations. 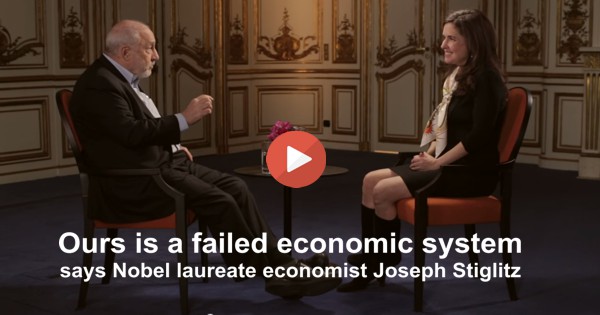