The Greek had a very proud populist moment 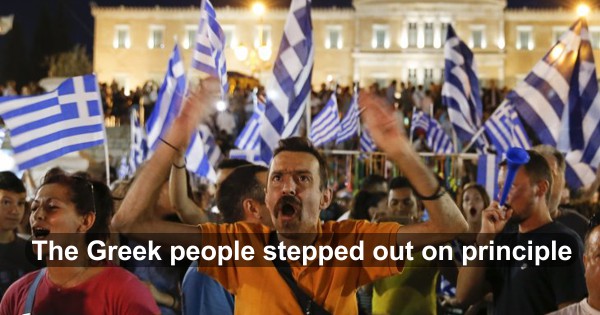 I will be frank. I was into the Greek referendum as if it were a referendum here in the United States of America. You see if the Greek had succumb to the fascist extortion by Germany and the Troika then it would have been tantamount to the distressed throughout the world acquiescing to the worldwide plutocracy. It would have meant that even after massive suffering effected by the policies of a failed worldwide economic system, the masses were too scared to make their demands.

The Greek did not blink. They did not bluff. They did not allow themselves to cower. They knew it would be difficult. But they said no. Can America learn something from this? Yes we can.

Politics Done Right covered the Greek no vote and much more

You can also find previous episodes on YouTube here.

Blog of the week

Yesterday my Politics Done Right show covered the Greek no vote and much more. The listeners who called into the show had a lot to say relative to our own economy. The reality is that the Greeks will still endure much pain and some more austerity in the short term given the stranglehold on their economy. They have however shown an independence that will give them the wherewithal to make a ‘change’ after the storm.

The show was very informational and worth a watch/listen.