Pope Francis is a revolutionary 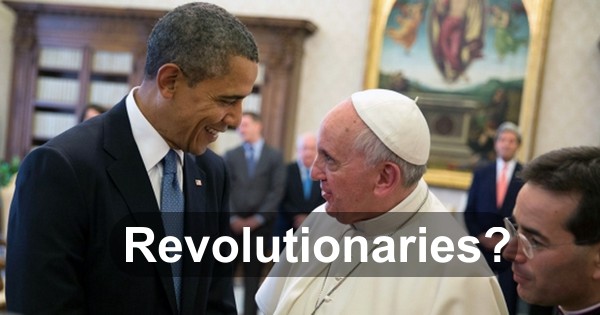 It is clear now. Pope Francis is a vocal revolutionary while others are methodical and deflective in the manner in which they effect revolutions however small. The pope is likely causing much angst among plutocrats, oligarchs, and fascist throughout the world.

Pope Francis in the past have referred to unfettered capitalism as the new tyranny. While many evangelicals have adopted a selfish unbridled capitalism as their god, the Pope true to form continues to channel the true biblical Jesus.

Pope Francis is currently in Bolivia. He addressed participants of the second world meeting of popular movements, an international body that brings together organizations of people that include the poor and the downtrodden in Santa Cruz. The democratically elected Bolivian president Evo Morales' speech preceded the Pope's. The Pope praised President Evo Morales for effecting social reforms that spread the wealth of the country.

It was not long before the Right exploded from the Pope's remarks. Following is Rush Limbaugh's hyperventilation. He slams the Pope and then conflates the Pope's words and attack on unbridled capitalism to excoriate President Obama.

Rush Limbaugh slams both the Pope and President Obama

The Pope spoke in no uncertain terms. He was forceful, unapologetic on principle, and direct. According to The Guardian he made the following statements.

Quoting a fourth century bishop, he called the unfettered pursuit of money “the dung of the devil”, and said poor countries should not be reduced to being providers of raw material and cheap labour for developed countries.

“Let us not be afraid to say it: we want change, real change, structural change,” the pope said, decrying a system that “has imposed the mentality of profit at any price, with no concern for social exclusion or the destruction of nature”.

The pontiff appeared to take a swipe at international monetary organisations such as the IMF and the development aid policies by some developed countries.

“No actual or established power has the right to deprive peoples of the full exercise of their sovereignty. Whenever they do so, we see the rise of new forms of colonialism which seriously prejudice the possibility of peace and justice,” he said.

“The new colonialism takes on different faces. At times it appears as the anonymous influence of mammon: corporations, loan agencies, certain ‘free trade’ treaties, and the imposition of measures of ‘austerity’ which always tighten the belt of workers and the poor,” he said.

The Pope provided a strong defense of labor unions. He asked for forgiveness of the church and for the crimes committed throughout the Americas against the true Americans, the people native to these lands.

The Pope is a man of principles. Unlike religious leaders who have attempted to find Biblical reasons to support selfish policies, economies and institutions, the Pope shows what Jesus must have looked like to the Pharisees. Way to go Pope Francis.