I can never understand why those on the Right believe that criticizing the ills of unfettered capitalism is some sort of a wealth envy condition. One does not criticize something that is helping most. Rush Limbaugh said the following.

Rush Limbaugh further attempts to convince his audience that many criticize the current implementation of capitalism because it helps many. Does that make any sense? It is as silly an argument as those stating that those others over there hate us because of our freedom. It is a bait and switch technique that we must fight against lest people absorb fact-less 'facts'. If our brand of capitalism was improving the lives of most, then one could not buy support for anyone speaking out against it. In the insular view of many, examining outside of one's sphere is seldom done. That is dangerous as it is the fuel and fertilizer for revolution.

The undignified criticism of Pope Francis was not good enough for Rush Limbaugh. He needed to make the Pope's statements an attack on the accomplishments of President Obama.

Rush Limbaugh went on to state that the only reason President Obama was elected was because he is black and the country wanted to make a statement. He said it does not matter what Obama said, he would have been elected anyway. During the same diatribe he claimed that he does not believe the country is at the tipping point yet (read become enlightened with liberals) because President Obama would not have been elected if he ran on the policies he has implemented. Aren't those two statements mutually exclusive? Ironically the President has implemented and attempted to implement all the policies he ran on.

Rush Limbaugh depends on low information listeners who use his pronouncements as fact. That is what enlightened readers must mitigate and help change in order to improve our discourse.

He continued to lie about healthcare reform even as the numbers and outcomes continue to show it performing better than the best expectations. The lack of economic activity he talks about while not as pronounced as he states is a direct result of Republican imposed austerity policies by not implementing stimulative policies to rebuild our infrastructure, increase the minimum wave, and implement student loan reforms. When he speaks about employers adjusting hours based on regulations, he is in fact describing the manifestation of unfettered capitalism where the employee is just a commodity.

Rush Limbaugh ends with a rather sophomoric statement.

The closest we have had to the capitalism the Pope and these clowns are talking about is the Reagan years. And look at what happened. Look at the economic boon that lasted practically twenty years.

Rush, I am glad you mentioned that. 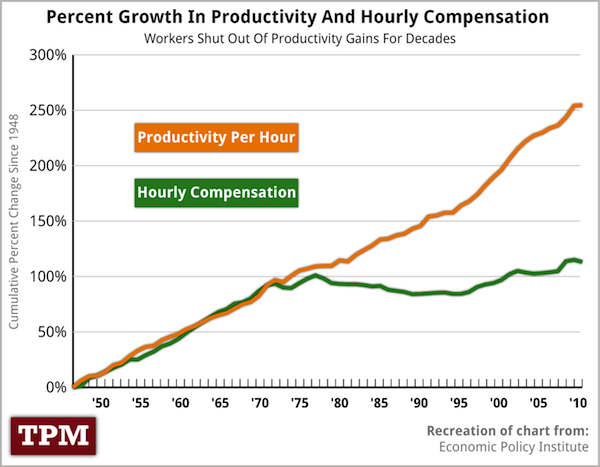 In fact you are correct that that is the capitalism the Pope is talking about. For that is when we got huge productivity increases from workers. At the same time the wealth and income from that productivity went to the unfettered capitalist and not to the workers.

You have made our point. Thank you very much.