It is time for Alternative Media to take full control 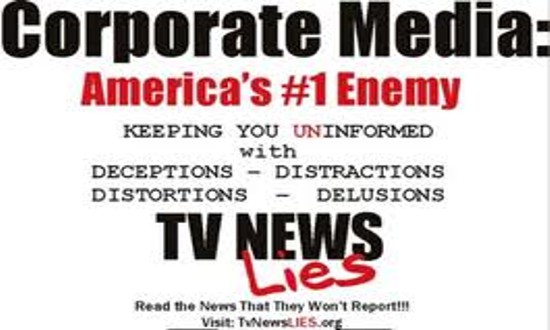 The media is changing perceived reality and with that reality itself. It must do that in order to maintain the power of the few over the many. In the case of the presidential elections, its intent is to promote candidates acceptable to the plutocracy. It does not matter whether the candidate is a Democrat, a Republican, or otherwise. It simply ensures that all are acceptable choices for the plutocracy.

Bernie Sanders continuously says that it is going to take a revolution to really change America. It is going to take a revolution to ensure a candidate not aligned with the plutocracy and the corporatocracy is elected. Several hundred thousand adoring fans dispersed throughout a nation of over three hundred million souls indoctrinated by shock misinforming media, a revolution does not make. A revolution requires education. Education will not be delivered to the masses on corporate TV, corporate radio, or corporate newspapers. It is a waste of time. They have their marching orders.

It is a fact that the mainstream media will not cover the Bernie Sanders of the world fairly if at all. Given that, why continue begging for a lover that never will. The effort should be expended on those willing to be your lovers.

Bernie Sanders has a growing following. He must turn those followers, each one of them, into activists of all kinds. He must turn them from fans and consumers of information to disseminators of information, disseminators of truth, and educators. Instead of spending much of his time being condescended to on Meet the Press and on other corporate media programs, he must invite bloggers, vloggers, independent writers, disc jockeys, independent radio hosts, internet radio hosts, in every city for interviews and education sessions. This will really empower the grassroots because there would be seedlings growing from the inside of the masses throughout the country.

We will be discussing this on Politics Done Right today.