It would not be long before the topic of Democratic Socialism made its way into the debate. That was to be expected. Anderson Cooper however showed a hint of red-scare red-baiting McCarthyism in the manner in which he framed the question to Bernie Sanders.

He first pointed out correctly that a Gallup poll stated that about 50% of Americans said they would not elect a Socialist. Bernie Sanders inferred those numbers would change when he made the correct and compelling argument of what his Democratic Socialism meant.

That caused Anderson Cooper to first make an intellectually lacking comment and then an attempt at red-scaring. His response to Denmark’s success of having better humane social policies was that Denmark was a small country. That statement is implicitly and explicitly stupid. The valid metric is per capita GDP of the country. America’s per capita GDP far exceeds Denmark’s. As such we made the moral choice to be relatively inhumane to our own.

But Anderson Cooper would go further. “You — the — the Republican attack ad against you in a general election — it writes itself.” Anderson Cooper said. “You supported the Sandinistas in Nicaragua. You honeymooned in the Soviet Union. And just this weekend, you said you’re not a capitalist. Doesn’t — doesn’t that ad write itself?” The problem is the framing of the question. It implicitly assumes a very dumb populace even as Bernie Sanders previously stated his revolution involves educating the populace to inoculate them against the expected barrage of falsehoods and scare tactics from the GOP.

Hillary Clinton tried to acknowledge the ills of capitalism in a backhanded fashion. Paraphrasing, it gets broken at times but we need to save it because it built the middle-class. She then used small businesses as a definition of what capitalism built. As usual many like to conflate capitalism with free enterprise.

A vibrant small business sector is dependent on free enterprise. Capitalism is the tool of manipulating them. As an example. Main street may have several bakeries, drugstores, meat markets etc. owned by hundreds of individuals and families. The chairman of the board of Wal-mart, a company capitalized by many likely outside that community, decides he/she wants to come to town. He/She opens one superstore. All those businesses are shuttered.

The above is a simple example. One can go much deeper not only for small businesses but for healthcare but for our overall economic well-being and exploitation. The working people subsidize the very few capitalist with their labor and diminishing purchasing power, who make money from moving paper and selling stocks. 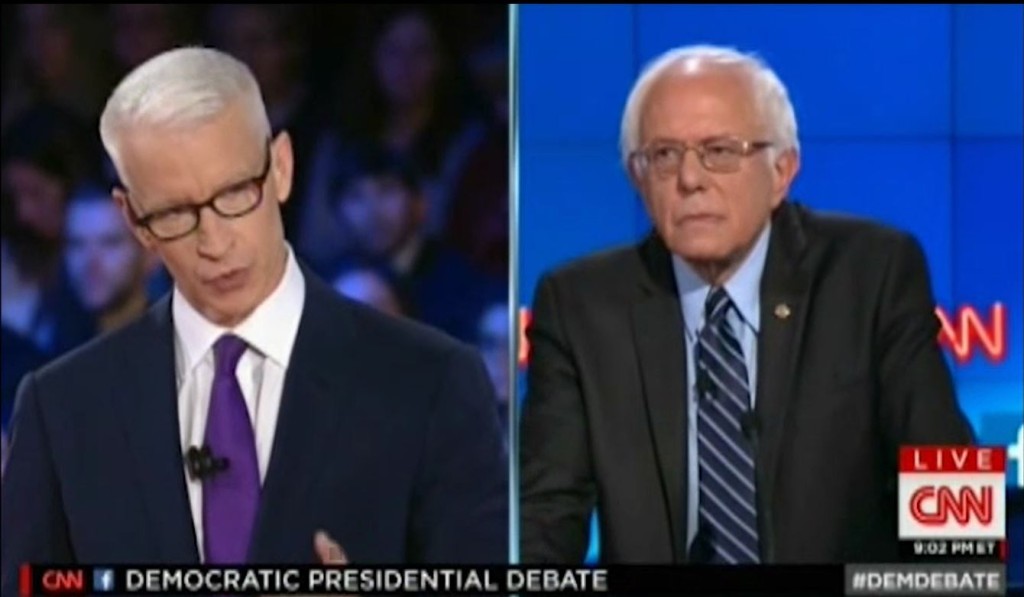 Anderson Cooper: Senator Sanders. A Gallup poll says half the country would not put a socialist in the White House. You call yourself a democratic socialist. How can any kind of socialist win a general election in the United States?

Bernie Sanders: Well, we’re going to win because first, we’re going to explain what democratic socialism is. And what democratic socialism is about is saying that it is immoral and wrong that the top one-tenth of 1 percent in this country own almost 90 percent — almost — own almost as much wealth as the bottom 90 percent. That it is wrong, today, in a rigged economy, that 57 percent of all new income is going to the top 1 percent. That when you look around the world, you see every other major country providing health care to all people as a right, except the United States. You see every other major country saying to moms that, when you have a baby, we’re not going to separate you from your newborn baby, because we are going to have — we are going to have medical and family paid leave, like every other country on Earth. Those are some of the principles that I believe in, and I think we should look to countries like Denmark, like Sweden and Norway, and learn from what they have accomplished for their working people.

Bernie Sanders: Well, first of all, let’s look at the facts. The facts that are very simple. Republicans win when there is a low voter turnout, and that is what happened last November. Sixty-three percent of the American people didn’t vote, Anderson. Eighty percent of young people didn’t vote. We are bringing out huge turnouts, and creating excitement all over this country. Democrats at the White House on down will win, when there is excitement and a large voter turnout, and that is what this campaign is doing.

Anderson Cooper: You don’t consider yourself a capitalist, though?

Bernie Sanders: Do I consider myself part of the casino capitalist process by which so few have so much and so many have so little by which Wall Street’s greed and recklessness wrecked this economy? No, I don’t. I believe in a society where all people do well. Not just a handful of billionaires.

Anderson Cooper: Just let me just be clear. Is there anybody else on the stage who is not a capitalist?

Hillary Clinton: Well, let me just follow-up on that, Anderson, because when I think about capitalism, I think about all the small businesses that were started because we have the opportunity and the freedom in our country for people to do that and to make a good living for themselves and their families. And I don’t think we should confuse what we have to do every so often in America, which is save capitalism from itself. And I think what Senator Sanders is saying certainly makes sense in the terms of the inequality that we have. But we are not Denmark. I love Denmark. We are the United States of America. And it’s our job to rein in the excesses of capitalism so that it doesn’t run amok and doesn’t cause the kind of inequities we’re seeing in our economic system. But we would be making a grave mistake to turn our backs on what built the greatest middle class in the history…

Hillary Clinton: … of the world.

Bernie Sanders: I think everybody is in agreement that we are a great entrepreneurial nation. We have got to encourage that. Of course, we have to support small and medium-sized businesses. But you can have all of the growth that you want and it doesn’t mean anything if all of the new income and wealth is going to the top 1 percent. So what we need to do is support small and medium-sized businesses, the backbone of our economy, but we have to make sure that every family in this country gets a fair shake…

Anderson Cooper: We’re going to get…

Bernie Sanders: … not just for billionaires.