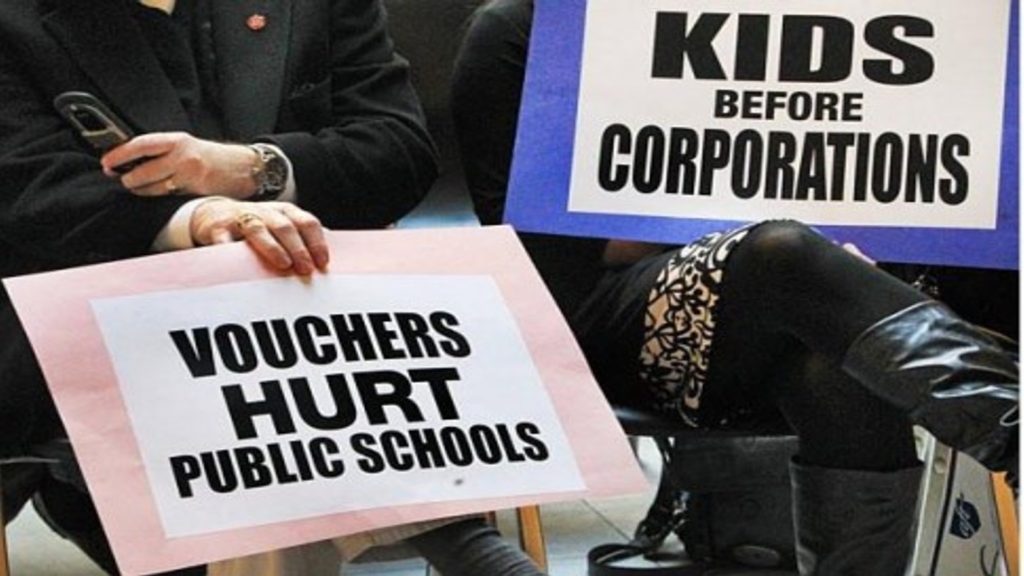 The paper below this article was found by a concerned Humble Independent School District parent. It should be distributed throughout the entire country. The 'privatization for profit school exploitation' movement is in full vogue.

Parents in the Humble ISD are fighting against the hiring of a controversial superintendent, Dr. Elizabeth Fagen. They recently protested the appointment in front of the administration building. They have been receiving support and advice from the parents in the Douglas County School District.

Elizabeth Hagen and her cohort attempted to institute a school voucher system in Colorado using a rather dishonest method to get around the law that was ultimately ruled unconstitutional. The Denver Post reported it as follows.

It is gratifying the Colorado Supreme Court saw through Dougco’s ruse. Under the program, the district created a make-believe charter school called the Choice Scholarship Charter School that would collect the state per-pupil funds. A portion of that $6,100 per student would be sent to the student’s chosen school in the form of a check to the parent, who would use it for tuition.

It’s not enough that the virtual charter school had no buildings, employed no teachers and had no curriculum. Its students never attended a day of class. The school’s existence was to collect money for private schools. Sixteen of the 23 private schools under the program’s 2011 pilot phase were religious in character, and 93 percent of the 271 scholarship recipients in 2011 enrolled in a religious school. Fourteen of those schools were outside of the district’s boundaries.

Parents need to keep their eyes open. Rigged school boards throughout the country are attempting to privatize our public schools.

ALEC Comes Clean, Vouchers Are for the Middle Class

Perhaps more importantly, ALEC's revisions to three of its "model" voucher bills make clear that it is changing focus from underserved inner-city schools to middle-class suburbia. The talking points at the end of the bills state:

As if to further nail down the point that school vouchers are not about equity, ALEC also advises legislators against including language “banning discrimination in hiring.” But if they choose to do so, they should “take care not to interfere with the ability of religious institutions to hire individuals who share their religious beliefs.”

ALEC is not the only organization coming clean on vouchers.

At the American Federation for Children’s National Policy Summit held in New Orleans, lobbyist Scott Jensen—who, before being banned from Wisconsin politics for violating the public trust served as chief of staff to governor Tommy Thompson, and was a prime mover behind the first voucher program in the nation—admitted that vouchers were really all about “pursuing Milton Friedman’s free-market vision” even though the ideological agenda was nowadays sugarcoated with “a much more compelling message ... of social justice.”

So what exactly was the brave new world Milton Friedman envisioned when he first floated the idea of school vouchers? While lecturing rightwing state lawmakers at a 2006 ALEC meeting, Friedman jumped at the opportunity to explain what his vision was all about. It had nothing whatsoever to do with helping “indigent” children; no, he explained to thunderous applause, vouchers were all about “abolishing the public school system.”

It has nothing to do with choice. It is all about ideology. It is an experiment that will irreparably hurt your kids' education.

This paper examines the push to expand public funding for private education in the form of vouchers or charter schools. It assesses school systems where vouchers have been implemented on a large scale, and where private school supply has increased, focussing on the example of Chile.

The paper concludes that the original Friedman idea that private schools would deliver education equal in quality to current public education at one-half the price has never been realised in practice. Private providers will demand at least as much as per student costs in local public schools and will avoid taking special education students. The political question then becomes whether legislators will pass voucher plans that provide large vouchers to low-income families but not to middle-class families.

(r/t Thank you, Stefania Scott, for finding this paper.)