Humble ISD has the most appropriate message

A few weeks ago the Humble ISD parents protested their school board for tentatively hiring Elizabeth Fagen, the controversial superintendent of the Douglas County School District. The board held a special meeting to allow parents to air their grievances and get answers from the board about their less than ideal choice.

Humble ISD parents and kids came early and conducted a peaceful protest outside of the school district’s headquarters to make the community aware of the actions of the board. School board activities are not paid much attention to because of the mundane nature of an established and thriving district. 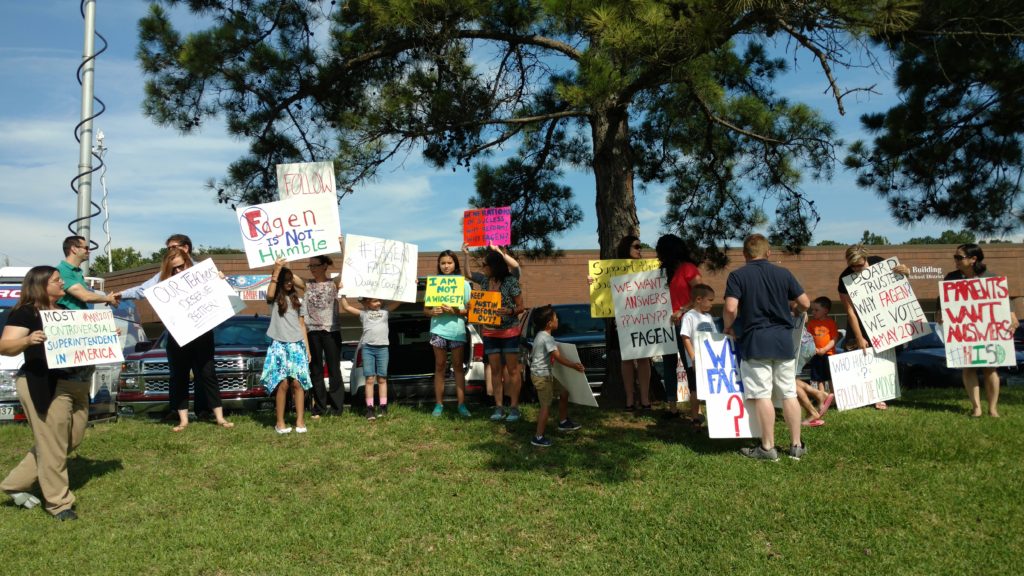 All three of the major local network stations attended the protest and portions of the board meeting. NPR, several bloggers, and local newspapers attended as well. 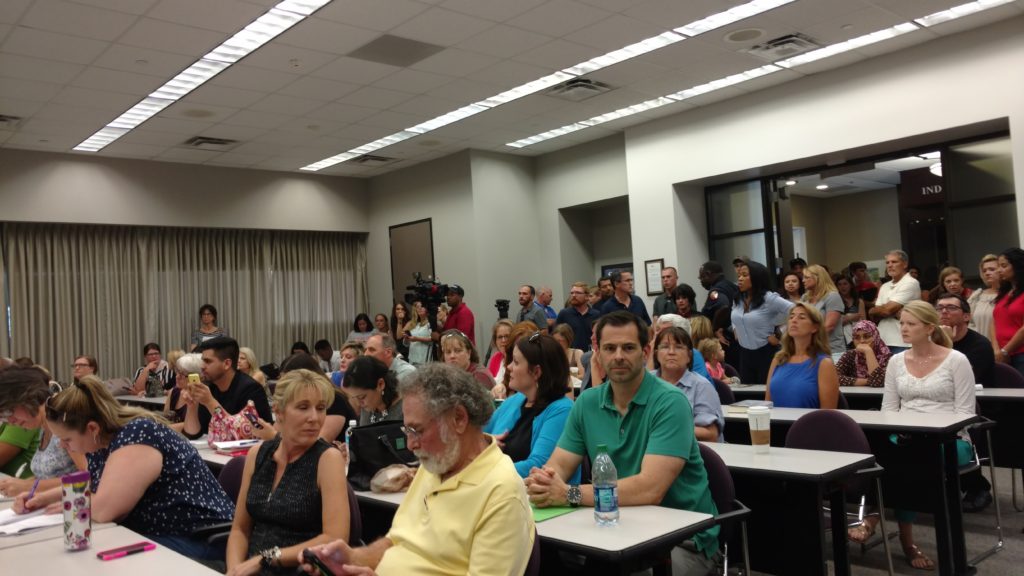 The board meeting with the parents began at around 6:00 PM. The board of directors chose a member that was not up for reelection, Keith Lapeze, to present the rationale for choosing Elizabeth Fagen. The presentation was an excellent sales job for anyone listening to the presentation at face value. Keith Lapeze’s performance lasted almost 3 hours. He filled it with unnecessary platitudes and condescending statements to the objecting parents. 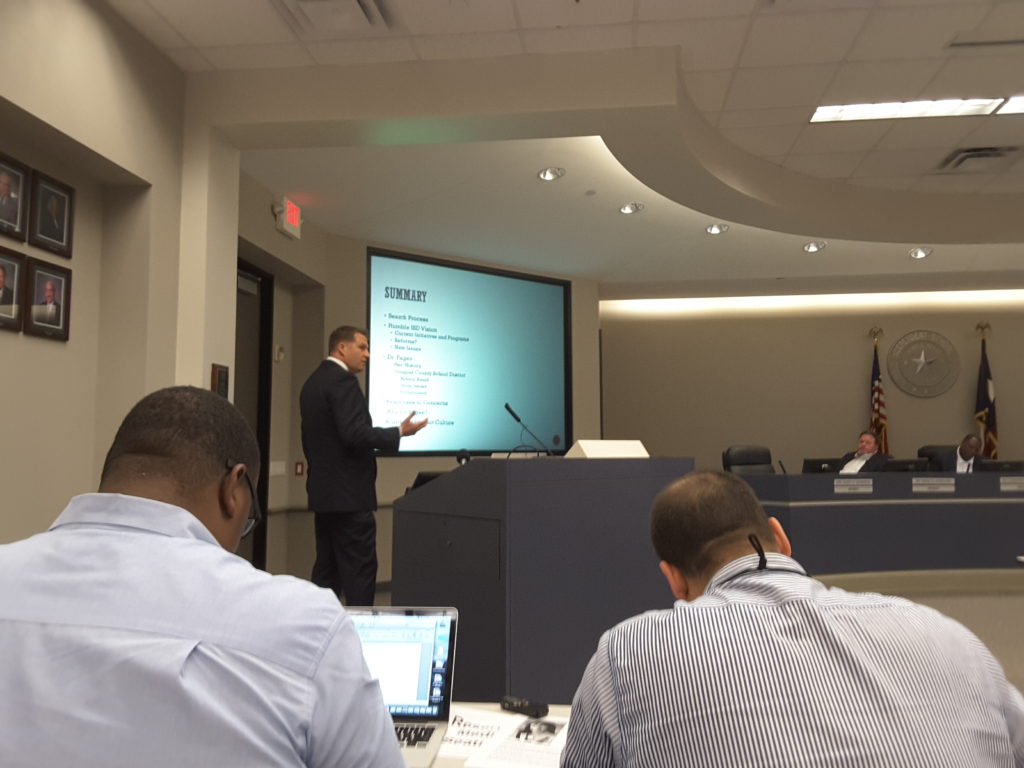 Why was the presentation as long as it was? The parents were well prepared and were interested in neither fluff nor superfluous verbiage. It was clear that the board wanted the presentation to be long enough to ensure that the parents with valid concerns did not make the 10 o’clock news. Having Humble ISD parents on TV would awaken many other parents who are not currently paying attention. The board was successful at that task. The TV media eventually vacated Keith Lapeze’s ‘filibuster’.

Most of the parents saw directly through the mischaracterizations and misinformation within the presentation. The vast majority of parents objected to both Elizabeth Fagen and the condescension towards the parents. In fact, board member Keith Lapeze implied parents getting together on Facebook were tantamount to organizing on the ‘Kardashian network’. He rebuffed a parent questioning their comprehension for which he quickly apologized.

The board did not answer the most important issues. Why would a controversial superintendent who moved from district to district and had poor communication skills even make the list of candidates let alone become their choice? An administrator with Dr. Fagen’s record would have to prove herself in a lesser district before getting the opportunity given at Humble ISD.

Ultimately the board gave the impression that they did not intend to rescind the offer to Dr. Elizabeth Fagen. Several grassroots movements are already in effect to mitigate that eventuality starting with the vote but ultimately with much more scrutiny of the board’s further actions.

Why does all of this matter? One thing every parent can agree on is that irrespective of politics or ideology, the education of our children is paramount. Parents listen to the promises of school board candidates and vote them in with the expectation that they will work solely in the interest of the kids in the district, ideology and politics be damn. It is likely the reasons school board elections are non-partisan.

Over the years, something started happening. Corporations have always been a part of the education system. After all, contracts for food services, infrastructure, building construction and maintenance are outsourced to private companies. The board is responsible for negotiating those deals. Most of the times parents are unconcerned with the intricacies of these subjective decisions.

Parents should never allow the education methodology nor education philosophy to be outsourced to corporations,  external ‘think tanks’, or masquerading trade organizations. Unfortunately, the American Legislative Council (ALEC) is an ideologically driven organization with its tentacles immersed in our public education. They aim to kill it (well privatize it) by having it bleed to death through a million cuts.

Who is ALEC? They define themselves as follows.

The American Legislative Exchange Council is America’s largest nonpartisan, voluntary membership organization of state legislators dedicated to the principles of limited government, free markets and federalism. Comprised of nearly one-quarter of the country’s state legislators and stakeholders from across the policy spectrum, ALEC members represent more than 60 million Americans and provide jobs to more than 30 million people in the United States.

It sounds innocent enough. It isn’t. This organization believes all aspects of our lives are better by using free market analysis. Free markets are a god instead of a tool. Humans serve the free market as opposed to free markets serving humanity. It is a perverse form of idolatry.

Free markets are ideal for producing and selling widgets. It foments innovation. Free markets for your kid’s education means if your child needs a little more help than the other kid, you either pay more, or it’s just too bad. It means penalization for being on the wrong side of the bell curve.

ALEC politicians currently lead the state of Texas. They are walking the path with ALEC written legislation. The bills that follow are troublesome.

These bills should concern every parent irrespective of their political affiliations. It is a backdoor corporatization of our public education system.

The Humble ISD board reminded the parents that they voted against vouchers. That is true in a strict sense. Realize however that they will hide behind selective mandates from the states that continue to find workarounds. They will not call it vouchers. They will find innovative ways of instituting programs if not by name by its implementation. This can only occur if parents are not vigilant and if parents do not elect directors unwilling to experiment with our children’s education controlled by the ‘free markets’.

The fact is that Humble ISD is currently implementing ALEC’s strategy. Its ‘District of Innovation‘ is but a nuanced name for testing ALEC’s ‘The Innovation Schools and School Districts Act‘.

Remember who was instrumental and who took credit for the election of this board. Remember what they stand for.