Rachel Maddow could not hold back about the catastrophe that is Trumpcare; the AHCA just passed by the Republicans House of Representatives.

Rachel Maddow spent the time to detail the pain that the AHCA will inflict on Americans if it ever became the law of the land.

Maddow explained with numbers the increased in premiums caused by various preexisting conditions. The premiums would be unaffordable and as such tantamount to not having insurance at all. 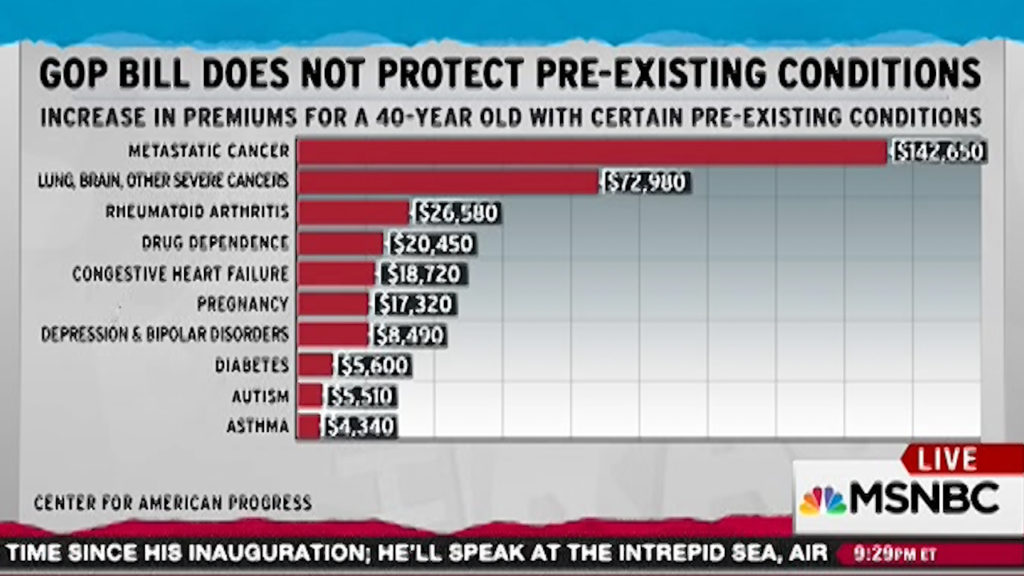 Maddow then went on to enumerate some of the major draconian features of the bill.

The AHCA is likely the largest wealth transfer from the poor and middle-class to the rich in the history of the United States. It is clear why Paul Ryan, Donald Trump, and all the heartless politicians who forced this bill were at the White House overjoyed. It takes a certain type of evil to rejoice after passing a bill that will hurt millions and kill thousands.

Learn why Single-Payer/Medicare-For-All is our future. MSNBC’s Ali Velshi explained, that the free market simply does not work for health insurance, period. Chuck Todd recently pointed out that the AHCA decimates coverage for all but mostly to the Trump voter.

Call your Senators and Congressional Representatives every day and let them know you do not want the Affordable Care Act repealed. Also tell them they must support H.R. 676, Medicare-for-all. If you do not know how to get in touch with them, click here.