Tucker Carlson sounded like a Progressive Democrat in the manner that he grilled Paul Ryan on Trumpcare. The Speaker made a facial expression at the end that should concern every Trump voter.

Paul Ryan likely did not expect the reception he got from Fox News host Tucker Carlson. He seemed a bit taken aback with the grilling.

"Let's get the tax policy so as I understand it," said Tucker Carlson. "And I'm just reading this. So I may have it wrong. But there's an investment tax in here, the net investment income tax. And as far as I know, it only kicks in on couples making over a quarter million dollars a year. So it's a tax on wealthy investors, and you're eliminating it."

"So I guess my question is looking at the last election was the message of that election really we need to help investors?" Carlson asked. "I mean the Dow is over 20,000.  Are they really the group that needs the help?"

"This was a tax on capital income which is bad for economic growth," Paul Ryan said. "It's basically a capital gains tax increase effectively to finance Obamacare. We're undoing Obamacare. So we're not going to keep Obamacare taxes in place. So all of these taxes, the trillion dollar tax cut that this bill represents, that is part of that trillion dollar tax increase that was in Obamacare, to finance Obamacare. We're repealing, we promised we would repeal the Obamacare taxes. This is one of the Obamacare taxes. So we're keeping our promise. And, by the way, it's bad tax policy because it's bad for economic growth. And we're also repealing the Obamacare spending. So we're getting rid of its taxing, and we're getting rid of spending. And this is us keeping our word. You may want to keep that 3.8 percent tax. We're not going to keep it because it was part of Obamacare." 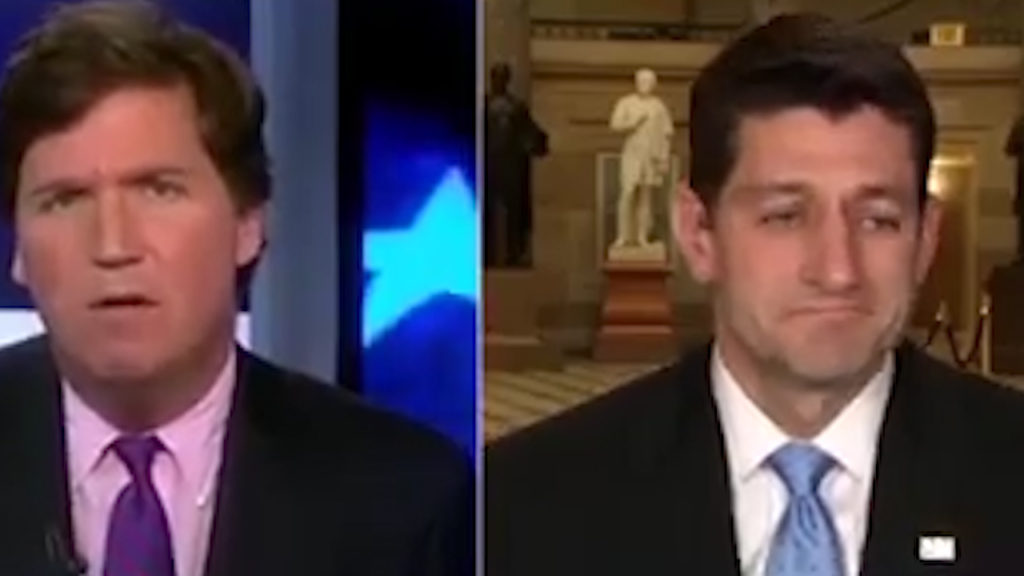 "Well but lots of things are part of Obamacare," Carlson said. "You just said a minute ago you're not doing anything about because you can't under reconciliation. But you just said they look to meet every promise in this first round. I guess it's a macro question. ... But also I mean you have the overview here is that the all the wealth basically in the last years is stuck to the top end. That's one of the reasons we've had all this political turmoil as you know. And so kind of a hard sell to say yeah we're going to repeal Obamacare, but we're going to send more money to people who've already gotten the richest over the last ten years I mean that's what this does no? I'm not leftist. It's just that's true you."

The shrug on Paul Ryan's face says it all. He is unconcerned that many Americans including some of Donald Trump and his constituents would be most affected. It should be no surprise. Paul Ryan once required his staff to read Ayn Rand's Atlas Shrugged. If this isn't evil, what is?