When it was announced that several journalists would travel with Sen. Bernie Sanders in October for a hospital tour of Canada to learn about its single-payer system, one question immediately sprang to mind:  What would corporate media do to smear universal healthcare this time?

It is a sad reflection on the state of healthcare reporting in the United States that one can so easily predict how many media outlets will respond to a news event before it even happens.  Yet for many familiar with years of media either ignoring or rejecting the merits of a universal public healthcare system—Canada’s in particular—it was hard not to expect dismissiveness and/or mockery from outlets such as the New York Times and Vox, who sent reporters on the tour.

The results were unsurprising. Vox (10/31/17) used the occasion to explain why single-payer is likely a pipe dream that doesn’t fit with American values. Much of the Times article (11/2/17) read like satire aimed at mocking Canada and Sanders. 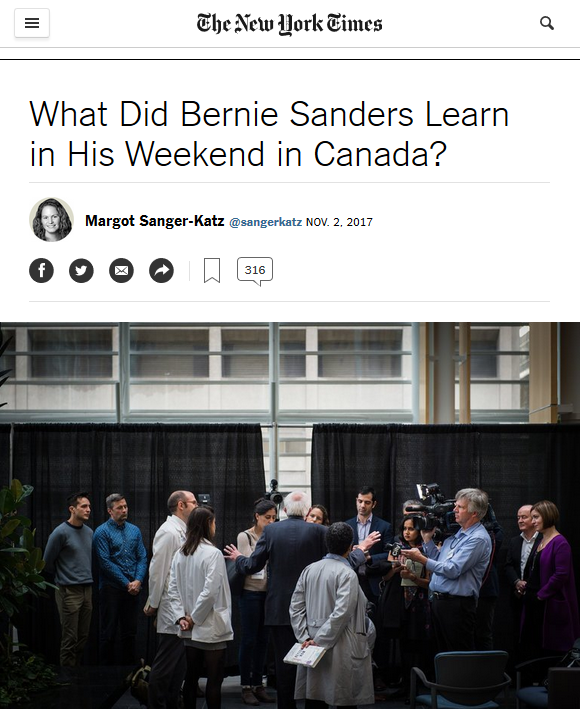 A New York Times ad circulating on Facebookproudly declares: “Evidence-driven reporting. No matter what the subject.” It’s a hollow boast to those familiar with the paper’s uniformly negative coverage of single-payer, and Margot Sanger-Katz’s write-up of Sanders’ tour is a glaring example.

“What the US Can Learn from Canadian Healthcare” was the title of Sanders’ tour-summarizing speech in Toronto. “But our question is: What did Sen. Sanders learn from his weekend in Canada?” Sanger-Katz said. The paper seemed less interested in  what the US could learn about Canadian healthcare—even though healthcare is the most pressing concern for American families (Gallup, 6/23/17)—instead started off with a focus on Sanders himself.

“He’s a ‘rock star,’” was the article “Lesson No. 1” from the trip.   The United States is in a healthcare crisis, and yet the Times prioritizes anecdotes, such as a story about an airport security guard in Toronto calling Sanders a “hero,” over anything of substance.  The effect is to portray Sanders as some Jonestown-style cult hero, as opposed to a serious policymaker:

Ed Broadbent, the chairman of the progressive Broadbent Institute, called Mr. Sanders the most important social democrat in North America, even though Mr. Sanders is not a Canadian social democrat, and is not even a particularly powerful member of the Senate.

It’s odd to “correct” Broadbent by pointing out that “Sanders is not a Canadian social democrat,” since that claim was never made; that Sanders is a social democrat and in North America would seem to be uncontroversial statements.

As for Sanders not being “a particularly powerful member of the Senate,” that’s obviously subjective, but it’s not the opinion of mainstream Beltway sources (Politico,  5/26/16; The Hill, 9/13/17). Significantly for the topic at hand, he managed to convince 16 other Senators to support a Medicare for All bill, up from zero a few years ago.

The paper does touch on some policy implications, not all of which are negative. The Times, Lesson No. 2, for instance, is that system is popular among doctors and patients.  “Several patients told [Sanders] about the comfort that comes from not having to pay for their care directly,” the article said, noting that doctors were also largely supportive.

But outside of noting popular support in Canada, the benefits of single-payer are barely addressed.  The Times, does emphasize flaws, of course—most notably, it declares long waiting times, the most common right-wing/industry attack on the Canadian health system, as “lesson No. 3.” While often exaggerated in the US, it’s true that Canada has problems with wait times (CBC News, 2/16/17), ranking well above the international average in the amount of time it takes to see a specialist or have an elected surgery. This, however,  is one of the only metrics in which the United States ranks higher than Canada, according to the 2017 Commonwealth Fund report (7/17) on the healthcare systems in 11 wealthy nations.

A reader of the Times’ report fails to learn that Canada’s universal coverage costs 55 percent what the US system does on a per capita basis. They don’t know Canada has better outcomes in key metrics like life expectancy and infant mortality. Waiting times are important, but in the US as many as 45,000 people die each year because they couldn’t get care due to a lack of insurance, a problem that doesn’t exist in Canada. At least Canadians get to see a doctor at some point, something that 28 million uninsured Americans cannot count on. 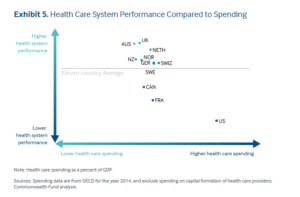 The Times cites the Commonwealth Fund report (7/17) and its overall ranking of 11 wealthy nations. In the report Canada ranks ninth, “only a little better,” the Times notes, than the US, which ranks last.

The report gives specific rankings on five subsections: care process, administrative efficiency, access, equity and outcomes.  The US ranks dead last in three of these outcomes, and second to last in another. Only in one of these rankings does the US rank higher than Canada (care process, where US ranks 5th, Canada 6th).  The Times does not mention these details.

They do, however, make a point to find ranking on a subsection of “access” (again, where US ranks last) for timeliness (where the US ranks ninth, two spots ahead of Canada). In short, the paper takes a report that concludes the US has the worst healthcare system, ranking below Canada is almost every metric, and spins it to portray Canada’s system as negatively as possible in comparison to the US.

This is an absurdly selective reading of a report whose damning conclusion was also not mentioned in the Times article: 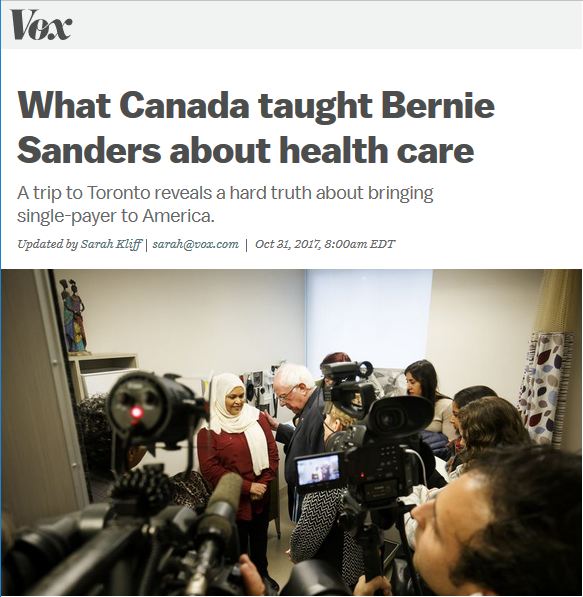 The New York Times has been reliably anti-single-payer for decades (FAIR.org, 7/1/93; Extra!, 4/1/10). Vox is a newer project, led by Ezra Klein and staffed mostly by moderate/liberal wonks. But it has largely advanced a similar neoliberal narrative as the dominant media, if more firmly rooted in Democratic Party establishment politics (Jacobin, 1/25/16). It has already gone to unique lengths to dismiss single-payer (e.g., 1/17/16, 1/20/16; 9/8/17).  As Glen Frieden recently noted (FAIR.org, 9/18/17), it even modifies its headline style to distance itself from the idea.

Vox’s major investor is Comcast (Wall Street Journal, 8/10/15), a massive conglomerate that owns numerous media outlets, including NBC and MSNBC, and has deep ties to the healthcare industry (FAIR.org, 1/30/16). When Sanders introduced a healthcare plan in the 2016 presidential election, Klein was quick to disparage it as “puppies and rainbows,” saying it didn’t qualify as a plan at all. (No wonder the Clinton campaign team was so eager to coordinate with Klein during the campaign, as the leaked Podesta emails show.)

Vox’s coverage of Sanders’ trip to Canada, written by Sarah Kliff (10/31/17), was of a piece.  Her angle was that the trip only illustrated the difficulty of bringing single-payer to America—because Canadians view healthcare as a  human right, and “that belief doesn’t seem to exist in the United States right now.” Canada’s emphasis on equity and universality is not shared by enough Americans, only a small majority, as she notes.

She then mentions a number of anecdotal examples of Americans who dislike public healthcare, some of them from a New Yorker article (10/2/17). “But I know so many folks on Medicaid that just don’t work. They’re lazy,” said one rust-belt librarian. Another man named Joe says:

I see people on the same road I live on who have never worked a lick in their life. They’re living on disability incomes, and they’re healthier than I am.

Vox could’ve just as easily found two citizens in the same region who are strongly supportive of single-payer. (After all, as she concedes, a majority of Americans believe the government should provide healthcare to all.) So these anecdotes don’t demonstrate anything beyond the fact that  some opponents of healthcare as a right exist. This is true in Canada, too, as it is everywhere.

Kliff argues that the modest majority of Americans who support Medicare for All (she cites a Pew poll showing 60 percent support), isn’t enough consensus to have a single-payer system. In contrast, a poll from the Canadian Health Commission (8/26/14) shows “85 percent of Canadians support (79.6) or somewhat support (5.6)” government-solutions to healthcare.

The problem with this is that Kliff is comparing US sentiment today to Canadian sentiment today. But Canadians have lived under single-payer for decades now and have seen outcomes improve. Would it not make more sense to compare Canadian sentiment back in the 1950s or 1960s, when the battle for Medicare for All was at a peak, with doctors striking in opposition?

In fact, the US in 2017 has a nearly identical proportion of citizens who support single-payer as Canada did at the infancy of its struggle. A 1960 Gallup poll in Canada (Medical History, 4/11) showed 60 percent of the country approved of “a state-led (single-payer) medical care insurance plan.” This number is identical to the US support shown for single-payer in an Economist/YouGov poll (4/2/17) from earlier this year, and similar to most US poll results.

Contrary to Kliff’s thesis, the US supports  a universal, public health system about as much as Canadians did when they were fighting for its implementation. This would seem to be a reason for optimism for single-payer, not the opposite, as Vox suggests.