Donald Trump stepped in it once again. Taking his cue from Fox News, he decided to let his mindless Twitter finger go to work on another tweet that did nothing but bring shame to America for its healthcare policies.

Trump scorched by both the British Left & Right on healthcare

Donald Trump’s Twitter finger continues to draw the wrath of foreign governments as he continues to show his ignorance on healthcare and everything else.

After listening to Fox News misrepresent (read lie about) the demonstrations in the United Kingdom against the underfunding of their National Health Service (NHS), Trump sent out an uninformed tweet, a Fox News inspired tweet.

The Democrats are pushing for Universal HealthCare while thousands of people are marching in the UK because their U system is going broke and not working. Dems want to greatly raise taxes for really bad and non-personal medical care. No thanks!

It was not long before the entire British government responded to the ill-advised tweet. British Health Secretary Jeremy Hunt responded to Trump’s tweet as follows. 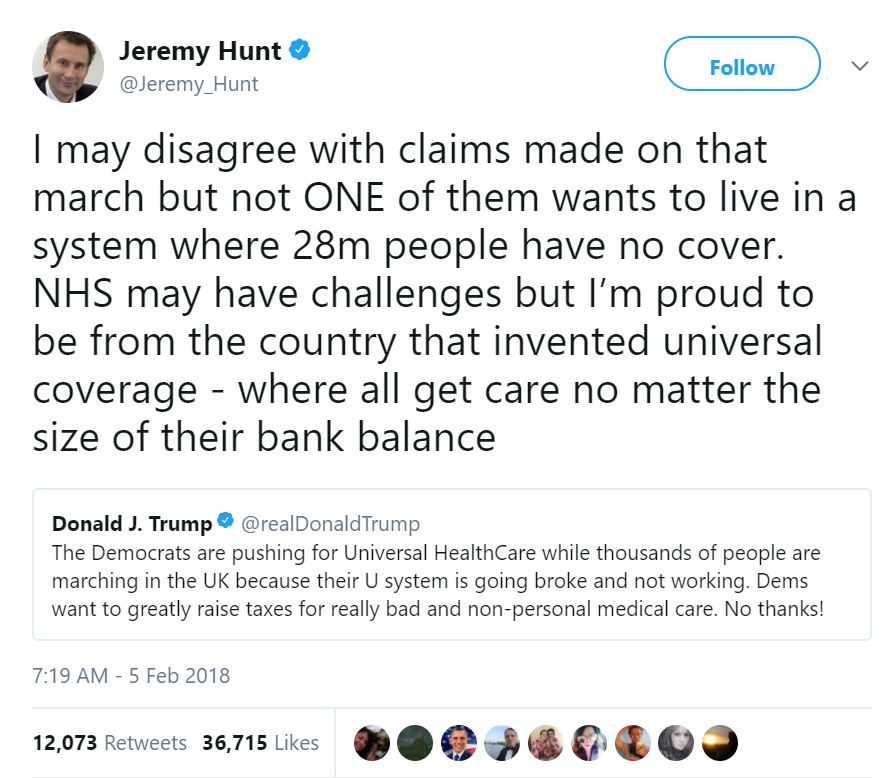 I may disagree with claims made on that march but not ONE of them wants to live in a system where 28m people have no cover. NHS may have challenges but I’m proud to be from the country that invented universal coverage – where all get care no matter the size of their bank balance

Prime Minister Theresa May’s spokesperson said, “The prime minister is proud of having an NHS which is free at the point of delivery.” In other words, none of their citizens are turned away for healthcare because they are poor or have no money.

Opposition Labour Party leader Jeremy Corbyn stuck it to Trump more so than the others.

“I really can’t go through the thought process of Donald Trump on this matter,” Jeremy Corbyn said. “All I would say to him is that millions of Americans don’t get access to any healthcare.”

Corbyn is correct. With all the problems the NHS is having, their healthcare system is still better than ours based solely on outcomes.

The Right tries to use these hiccups in healthcare systems around the world to justify the draconian system in the United States. Our government because of its negligence caused the legal execution of many of its citizens for lack of health services commensurate with the prosperity of our country just to protect an industry that robs us blind.

The only solution from a basic mathematical and ethical standpoint is a Medicare for All single-payer health care system. Read up on it and force your politician to adopt HR 676 or lose.