This is not about Ted Cruz. This is about Jimmy Kimmel, a white liberal elitist who pretends to give a damn about social responsibility.

Ted Cruz does not care about Black people. He never has and he never will. We all know it, and he makes no effort to hide it. He thinks he is untouchable and for far too long he has managed to scare enough white people into voting for him, by convincing them that WE are the enemy. He has pushed his anti <insert anything non-white, Christian and wealthy> agenda straight to DC. He almost clinched the White House with his adopted southern bigotry and racism. Instead, we got Trump. The man that insulted Ted Cruz’s father and wife is now the man that has Cruz feeling emboldened to flaunt his privilege in our faces. But we knew this about Ted Cruz. We know that Ted Cruz has accepted at least $77k from the NRA to push their lethal agenda in Congress. We know Ted Cruz has tried to dismantle health care for the poor, sick and dying at every turn. We know Ted Cruz picks and chooses the constituents that he engages and he NEVER CHOOSES TO ENGAGE WITH BLACK AND BROWN TEXANS. 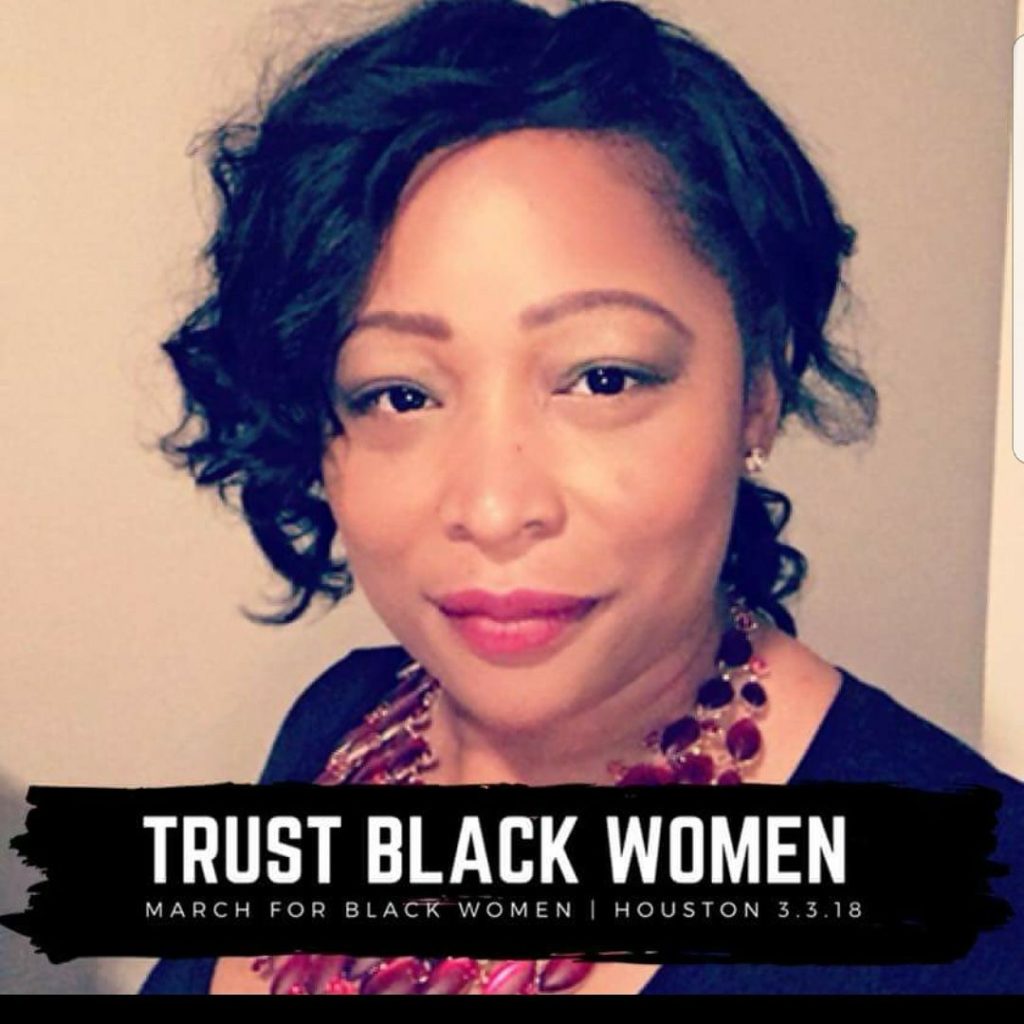 Kandice Webber is a registered nurse, a Black Lives Matter activist, and one of Houston’s most prolific activists.

This is not about Ted Cruz. This is about the white liberal elitist who pretends to give a damn about social responsibility. This is about the man that stood in front of cameras, with tears in his eyes, pleading for healthcare for all. The same man that helped launch NoRA, the coalition that was formed to take on the NRA. This is about Jimmy Kimmel and how a wealthy white man takes advantage of everyday people to advance themselves.

There are some key issues that need to be stated, here. This weekend is Juneteenth weekend. Black people, in Texas, have celebrated this day since Gen. Gordon Granger arrived in Galveston, Texas in 1865 to spread the news that the Emancipation Proclamation freed Texas slaves. Juneteenth is not some well-kept secret. It’s a huge deal in Texas but it is also celebrated in all but six states.  It is a day when Black folks gather together to celebrate our ancestors’ freedom.
For the linear thinking white liberal, I will repeat myself. JUNETEENTH IS THE DAY BLACK FOLK GATHER TO CELEBRATE OUR ANCESTORS’ FREEDOM!!! On that day, our ancestors learned they no longer had to live in chains and fear the whip of Massah.

We were freed that day, but Black people have never truly seen freedom. We have fought and struggled for the most basic rights that white men take for granted. Education is one of the key struggles in Black American history. Texas Southern University, as we now know it is the result of Black struggles, won. The origins of TSU date back to 1927. It was positioned in the heart of the third ward of Houston, Texas. It grew from a junior college inside Yates High School into a four-year university. Under the Separate but Equal concept, The Texas State University for Negros began to thrive. It expanded its curriculum to offer postgraduate degrees including law. A large part of the prosperity of this Historically Black University is due to the dedication the community in Third Ward paid. This university is something for us, by us. It wasn’t until June 1, 1951, that the name was changed from Texas State University of Negros to Texas Southern University (TSU). This came after the students petitioned the state to remove the phrase “for Negros” (tsu.edu). Texas Southern University is a cornerstone of the Black community. We love it, and we have always fought to preserve its mark on our community. It is our home and an institution that represents the ability and dedication, of our people, to withstand the constant attacks of oppression.

All the words I’ve shared with you, to this point are the things that ran through my head when I saw that tone deaf advertisement Jimmy Kimmel ran on twitter about his upcoming basketball game with Ted Cruz. I didn’t expect Kimmel to know the history of TSU but I certainly expected him to give a damn enough about his “perception of caring” to do his research on Black History. If he didn’t give a damn, surely one of his many producers could have Googled “things happening in Houston, Texas on June 16th.” Actually, there is a list of things Jimmy and his camp could have Googled.

Jimmy didn’t ask himself those questions because, like Ted Cruz, he does not care about Black people. It doesn’t matter to Kimmel that he is about to bring thousands of Cruz supporters to my neighborhood. It doesn’t matter to him that he is doing this at a time that MY family and I will be celebrating our ancestors’ triumphs in American history. Maybe it hasn’t occurred to him that people who support Ted Cruz disrespect and belittle the people that live around TSU every day. I know for certain that he knows Ted Cruz refuses to come to our neighborhood to talk about what he plans to do for our community because it Jimmy Kimmel knows Ted Cruz has no plans to do ANYTHING for our community. It doesn’t matter to Jimmy Kimmel because Black lives do not matter to the white moderate.

“I must confess that over the past few years I have been gravely disappointed with the white moderate. I have almost reached the regrettable conclusion that the Negro’s great stumbling block in his stride toward freedom is not the White Citizen’s Councilor or the Ku Klux Klanner; but the white moderate, who is more devoted to ‘order’ than justice; who prefers a negative peace which is the absence of tension to a positive peace which is the presence of justice…”

The words of Martin Luther King Jr… He saw this type of indifference play out in his time. He warned us from his cell in Birmingham jail. If I could ever be so bold as to transpose his words to this current situation… I am gravely disappointed in white liberals. It is obvious that the Black man’s greatest stumbling block is not Ted Cruz and the GOP but those like Jimmy Kimmel who would rather play games with our oppressors and pretend we can all agree to disagree. Fiction is favorable to facts because it spares the feelings of white people rather than expose the oppression and create an environment in which we can all live freely.

I am sure Jimmy Kimmel feels pleased with himself. After all, he has chosen Texas Children Hospital as his charity. How white of him! He can afford to feel good about this publicity stunt because, at the end of the day, he has money to provide for his children. This is something people like Jimmy Kimmel consider “a bonus.” He can have a little fun, raise a little money and boost the hell out of his ratings. Kimmel has the privilege to selectively forget about Ted Cruz’s track record on healthcare. In reality that $5K won’t amount to a hill of beans when it comes to changing the life of just ONE heart baby that wasn’t born to a millionaire. Ted Cruz giving five lousy thousand dollars to a charter school in Third Ward is the equivalent to robbing a bank and volunteering to pay the reward for the capture of the crook. Ted Cruz is the crook and he will continue to rob us like a thief in the night as long as dangerous white liberals, like Jimmy Kimmel, profit from the heist.

Just look at them. Ted Cruz thinks so little of his Black constituents that he refused to meet us for a town hall but turns around and plays basketball with his rich white friend on our court. They open the doors to our neighborhood, on one of our days of celebration, as if they own it. Cruz knows exactly what he is doing. He is inviting the same people that open carry through our neighborhoods back to flex on Juneteenth. He is throwing our children scraps from his table in the form of a charitable donation when he is the very person that is dooming them to an educational desert. This is a show of force from Ted Cruz and his MAGA hat wearing supporters. They are sending a message that our own space no longer belongs to us, even on one of our most celebrated days. Jimmy Kimmel has decided to be the amplifier of that message.

Let Jimmy Kimmel be a lesson to us all. No matter how believable the pleas of white liberals may be, they are not like us. They have the privilege of laying their convictions down while we die for ours. We are not the same and if we ever forget, they will remind us, even on Juneteenth.