The advertising on this lawn care business truck would likely be more shocking if we were not living in this new political landscape. Unfortunately, we are living through the Trump Effect in all corners of this country as what would generally be considered unacceptable becomes the norm.

I was on my way to the airport leaving the Kingwood, Texas suburbs when my wife called out in a disturbingly loud voice, "Did you see what's on that Truck?"

"Something about lawn care by Americans," she replied. "Or something like that. Turn here. You can probably get a picture and blog about it." 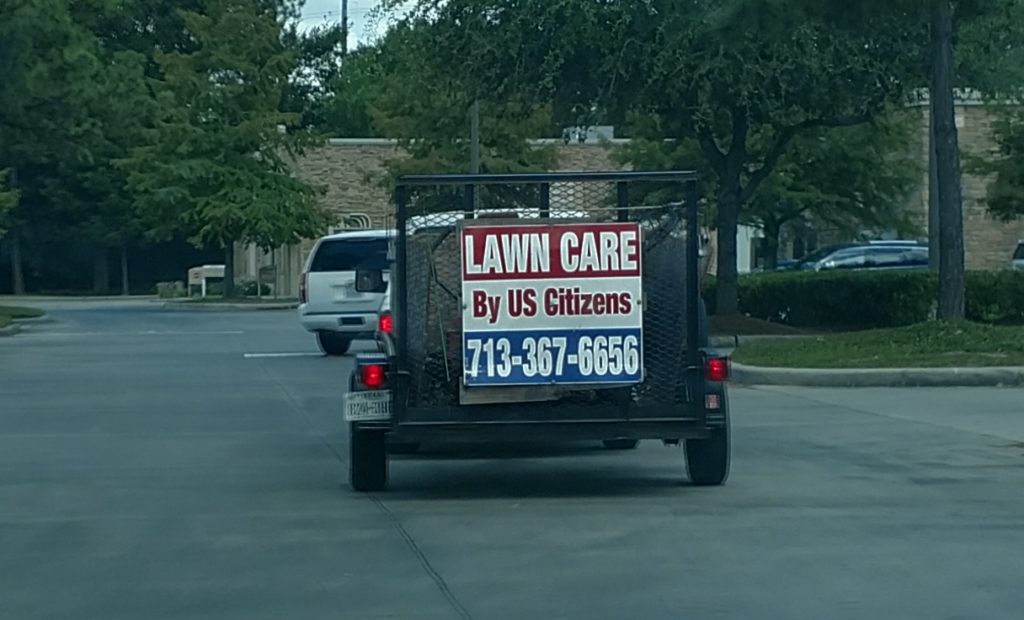 My wife did not have to tell me to get a picture. I was already turning on two wheels breaking every traffic law. Hey, this is not a confession.

I saw the lawn service truck going through the parking lot. I raced after him, grabbed my phone and got a couple of pictures. He started to park. For me, that was an opportunity.

Are you kidding me? This guy is parking. I cannot let the opportunity to talk to this guy get away. I want to see exactly where he is coming from and it is now or never.

I parked in front of him, and as he came out of the car, I approached him while talking nicely of course -- more on that later.

The owner of the lawn care service was a pleasant and gregarious person. He was also a businessman. He presented the classic example of how effective the racism, xenophobia tool is when used in marketing to the detriment of society at large.

I am a tall black guy. I approached this guy sort of hurriedly. He was not in the least apprehensive nor did he display the reaction I find the norm in many areas -- black man approaching a stranger and then the stranger displays an involuntary pullback likely because of race-based implicit bias.

I do not believe this guy is one of your generic racist xenophobes. I think he is a businessman taking the opportunity Trump has given many, He is playing the xenophobe card using the language of Trump and the Right. And in the short interview, he co-opts to his stance being a marketing tool inadvertently.

"It's marketing," the lawn care company owner said. "The customer knows I speak English. And that is why I get a lot of calls."

When I turned the camera off, the lawn company owner began to joke.

I said come on man, say that on camera.

But I know what he meant. It was another attention getter. You see, you rarely see white people doing lawn servicing in these parts.

When we understand that prejudice and racism are tools, nothing more, we will be able to work on the real issues that hurt our society. When we grow up, we will see that our plutocracy ensures we are divided in order to maintain power. If we are fighting each other we cannot take back what they have stolen.

When I got back into the car, my wife was a little put-off.

"You should not approach people in that way in these days," she said. "You are a black man. He could have pulled out a gun, said he feared you, killed you, and you know he would get off."

She is right that that could have happened. She is right about the likely conclusion of said eventuality. As a blogger, I try to size things up when interacting with strangers as best I can and as safely as I can with my approach. The one thing I will not succumb to is a crippling fear as that is what prevents us from making progress. That is how we maintain the status quo. We must all engage.