There is no reason whatsoever to celebrate America these days; the concept of good news has all but vanished. In fact, it is highly likely that a fair number of Americans are mourning the demise of their nation as it existed for 239 years and see nothing but the relentless advance of corporate fascism and a bloodless theocratic coup d’état on the near horizon; many observers, including this author, believe the theocrats have taken over already. These are seriously bad days for America as a nation, and devastating for any citizen that embraced a secular democracy with liberties and freedom for all Americans regardless of race, religious affliction, or gender. 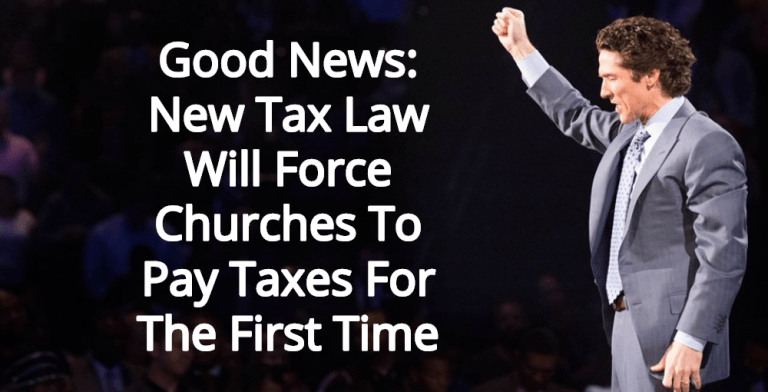 Churches say being taxed is absurd.

There was a bit of news recently that, although not necessarily good, is certainly worth celebrating if for no other reason than the religious right is up in arms over what they regard as an attack on their religious freedom. In addition, even more, a reason to marvel is that the attack came at the hands of Congressional Republicans and the religious right’s messianic hero Dumb Don Trump. This particular attack entails a little known “reform” in Trump’s highly touted GOP tax legislation that includes a first-ever tax on churches and other non-profits. It is a brief “good time” moment in what is now a horrifically hideous country run by a fascist pig with theocrats and white supremacists supporting his regime.

To remark that the various church leaders are dumbfounded and irate over being taxed would be a monumental understatement. Literally, hundreds of church leaders are struggling to comprehend why Republicans would dare treat them like every other American and business, and why their Republican facilitators stabbed them in the back in secret. Actually, since the GOP tax reform legislation was conceived and crafted in secret by the Heritage Foundation, and Republicans voted en masse to enrich the wealthy and corporations without even perusing that legislation, few in Congress were aware of the tax on “the church.”

However, this “tax outrage” is not the kind of tax regular people bemoan; it is a minor tax on the various freebies church and some non-profit organization’s employees receive. Still, the concept of religious organizations being required to contribute anything in the way of “a tax” has infuriated church leaders who vehemently insist that their tax exemption is “sacrosanct,” and non-negotiable.

Subsequently, over 600 churches, thus far, signed a petition demanding that Republicans repeal the tax immediately; because regardless what Jeff Sessions says about the Christian bible command to obey the government, the faithful say they are “exempt” from that particular Bible passage like they are exempt from contributing anything of value to America.

The gist of the “hidden tax atrocity” simply requires “churches, hospitals, and other historically tax-exempt organizations to begin paying a 21 percent tax on some types of fringe benefits they provide their employees.”

As a seasonal tax professional and former minister, this author is well-acquainted with the ridiculous number of “tax-free benefits” church employees, especially members of the clergy, receive because they are “blessed” to live in a country that gives churches tens of billions annually as “theocratic welfare.”

The new tax will seem like more “secular persecution” to churches and their employees who are accustomed to special treatment due to their “deeply held faith.” Expecting them to pay taxes like their bible commands is an abomination, and is perceived as the secular government punishing them. It is irrelevant that the “persecution” came at the hands of Republicans and Trump; Trump’s evangelicals, in particular, are beyond incensed. They are not satisfied that the same tax bill “persecuting” them with a small tax also grants them the unconstitutional and unconditional freedom to campaign from the pulpit with the Trump government’s blessings.

That perceived persecution has incited over 600 churches, and some other greedy groups, to sign a petition demanding the Republicans’ tax be repealed.  The churches claim they “don’t need the hassle” of taxes or interacting with the Internal Revenue Service (IRS) or their silly tax forms. The vice president of government relations at the National Association of Evangelicals, an umbrella group of evangelical organizations, Galen Carey said:

“There’s going to be huge headaches. The cost of compliance, especially for churches that have small staffs or maybe volunteer accountants and bookkeepers — we don’t need this kind of hassle.”

It is an affront to decency that Carey has the temerity to complain about “the cost” of obeying his evangelical bible’s command to pay taxes. It is a particularly egregious remark since churches receive tens-of-billions of free taxpayer dollars annually due to being exempt from taxation. Moreover, since Bush’s “faith-based initiatives,” they receive billions of taxpayer dollars in direct payments from the federal government because “faith.”

The Jewish Federations of North America (JFNA) is joining evangelicals in complaining that their group may face a tax bill this year because of the Republican tax reform that Trump celebrated signing. The senior tax policy counsel for the group, Steven Woolf, predicted the faithful would force Congress and the Treasury to “stop the outrage.” Woolf said:

“A lot of people are just finding out about it and the more people find out about it, the more pressure there will be on Treasury and Congress to either delay implementation or consider changing this.”

At least one Republican lawmaker is now promising to rescind the tax he just celebrated voting for because of god - or some related nonsense. As previously mentioned, many groups are beyond outraged that they are expected to adhere to Jeff Sessions’ favorite scripture, Romans 13, that commands abject obedience to the government. The churches are particularly aggrieved because Republicans failed to get clearance from the religious right before passing tax reform that Trump signed. According to the crybaby chairperson of the Evangelical Council for Financial Accountability, some malcontent named Mike Batts:

“What we’re talking about is an income tax on the church. It's absurd. The whole idea of tax exemption for nonprofit organizations that are doing charitable, religious and educational work is for them not to be on the same playing field when it comes to taxes, in order to incentivize the good work they do to make our society better.”

If Batts wasn’t an entitled religious cretin, he would understand that millions of Americans in jobs that “make our society better,” such as law enforcement, healthcare, education, disaster relief and the military pay taxes on all their earnings and employee benefits; and they don’t complain that they don’t understand how to do taxes.

Many of the 600 and counting churches demanding the tax’s abolition say they are confused over how exactly the tax is supposed to work - because they have been exempt unlike the rest of the population. Churches want to know how they are supposed to calculate the value of “freebies” they include as compensation for their employees. Some openly wonder if the garages provided as part of clergy residences are now taxable, or if they can still “double dip” and avoid paying their fair share of tax.

It is worth reiterating ad nauseam that religious organizations (churches et al) already receive at least $82.5 billion annually from taxpayers and that 2013 amount did not include the billions in faith-based initiative funding from taxpayers. In a fair country with a secular Constitution, churches would not be tax-exempt; it is probably why the immutable word of god and Jesus in the Christian’s holy bible commands the religion’s adherents to pay taxes.

Although this is not a major story among the daily revelations that America is lurching towards an evangelical theocracy with a corrupt fascist incrementally decimating everything decent about America, it is worth enjoying for a minute. Of course the “faithful” will force Republicans to abolish the tax, and they will continue using Republicans to take complete control of all facets of the government. They will succeed, in large part, due to a curious fear among Americans, the media and Democrats of “offending” the faithful by resisting their bloodless coup d’état.

It is little consolation, but for people devoted to America as a secular representative democracy, they now have an “event” to look back on fondly and they had better enjoy it. It is the last time the religious will ever be “inconvenienced” by the government because it is likely there will never be a law passed without the express consent of the religious right theocrats running America.

This article originally published at the Daily Kos.