Americans are likely in shock after Donald Trump's latest display of submissiveness to Vladimir Putin. It was as if Putin was pulling Trump's strings with his eyes, looks, and gestures. One could not help but describe Trump's behavior as some form of treason. 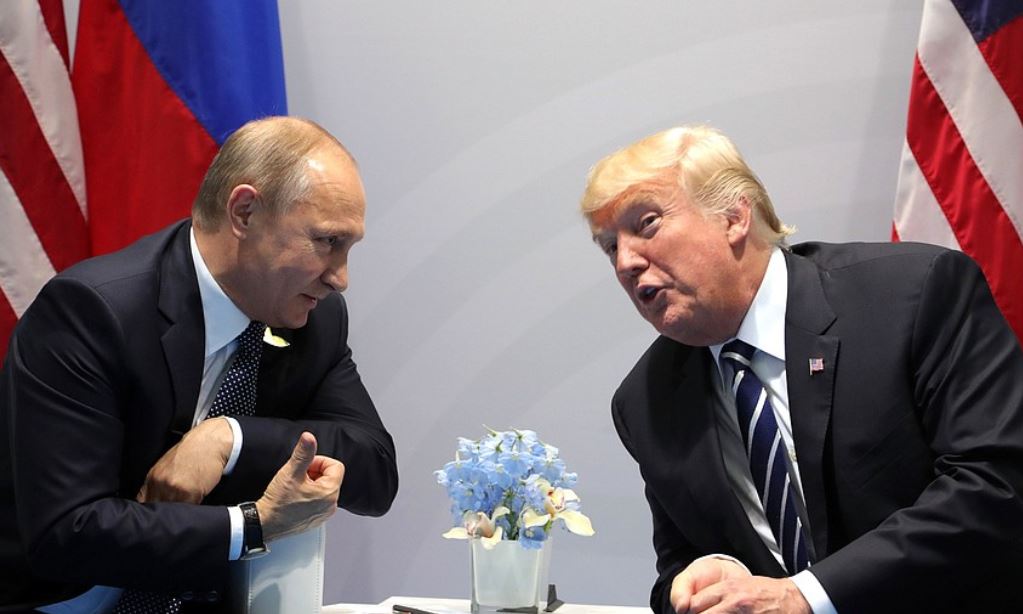 It is now the time to not only call out President Donald Trump but the Republican Party at large for appeasing Trump's possible treason.

Donald Trump made a fool of himself as he disparaged America in his press conference with Vladimir Putin after their meeting. Trump accused America of being partially responsible for the poor state of America/Russia relations. When asked if he believed his intelligence agencies about Russia's involvement in the U.S. 2018 election, the President said he asked Putin, and he forcefully denied it. He took the word of Putin over his agencies. Here is the transcript of that exchange.

REPORTER, JEFF MASON, REUTERS: Thank you. Mr. President, you tweeted this morning that it's U.S. foolishness, stupidity, and the Mueller probe that is responsible for the decline in U.S. relations with Russia. Do you hold Russia at all accountable or anything in particular? And if so, what would you what would you consider them that they are responsible for?

TRUMP: Yes I do. I hold both countries responsible. I think that the United States has been foolish. I think we've all been foolish. We should have had this dialogue a long time ago, a long time frankly before I got to office. And I think we're all to blame. I think that the United States now has stepped forward, along with Russia, and we're getting together and we have a chance to do some great things, whether it's nuclear proliferation in terms of stopping, have to do it, ultimately that's probably the most important thing that we can be working on. But I do feel that we have both made some mistakes. I think that the, the probe is a disaster for our country. I think it's kept us apart, it's kept us separated. There was no collusion at all. Everybody knows it. People are being brought out to the fore. So far that I know virtually none of it related to the campaign. And they're gonna have to try really hard to find somebody that did relate to the campaign. That was a clean campaign. I beat Hillary Clinton easily and frankly we beat her. And I'm not even saying from the standpoint...we won that race. And it's a shame that there can even be a little bit of a cloud over it. People know that. People understand it. But the main thing and we discussed this also is zero collusion and it has had a negative impact upon the relationship of the two largest nuclear powers in the world.We have 90 percent of nuclear power between the two countries. It's ridiculous. It's ridiculous what's going on with the probe.

REPORTER, AP: President Trump, you first. Just now, President Putin denied having anything to do with the election interference in 2016. Every U.S. intelligence agency has concluded that Russia did. My first question for you sir is, who do you believe? My second question is would you now, with the whole world watching, tell President Putin, would you denounce what happened in 2016 and would you want him to never do it again?

TRUMP: So let me just say that we have two thoughts. You have groups that are wondering why the FBI never took the server. Why haven't they taken the server? Why was the FBI told to leave the office of the Democratic National Committee? I've been wondering that. I've been asking that for months and months and I've been tweeting it out and calling it out on social media. Where is the server? I want to know where is the server and what is the server saying? With that being said, all I can do is ask the question. My people came to me, Dan Coates, came to me and some others they said they think it's Russia. I have President Putin. He just said it's not Russia. I will say this: I don't see any reason why it would be. But I really do want to see the server but I have, I have confidence in both parties. I really believe that this will probably go on for a while but I don't think it can go on without finding out what happened to the server. What happened to the servers of the Pakistani gentleman that worked on the DNC? Where are those servers? They're missing. Where are they? What happened to Hillary Clinton's emails? 33,000 emails gone, just gone. I think in Russia they wouldn't be gone so easily. I think it's a disgrace that we can't get Hillary Clinton's thirty three thousand e-mails. I have great confidence in my intelligence people but I will tell you that President Putin was extremely strong and powerful in his denial today and what he did is an incredible offer. He offered to have the people working on the case come and work with their investigators, with respect to the 12 people. I think that's an incredible offer. Ok? Thank you.

The question is, why does the "Make America Great" and "America First" president continue to destroy America's alliances precisely as Putin would want? New York Times' Thomas Friedman says it best in his article titled "Trump and Putin vs. America."

From the beginning of his administration, President Trump has responded to every new bit of evidence from the C.I.A., F.B.I. and N.S.A. that Russia intervened in our last election on his behalf by either attacking Barack Obama or the Democrats for being too lax — never President Vladimir Putin of Russia for his unprecedented cyberhit on our democratic process. Such behavior by an American president is so perverse, so contrary to American interests and values, that it leads to only one conclusion: Donald Trump is either an asset of Russian intelligence or really enjoys playing one on TV.

Everything that happened in Helsinki today only reinforces that conclusion. My fellow Americans, we are in trouble and we have some big decisions to make today. This was a historic moment in the entire history of the United States. There is overwhelming evidence that our president, for the first time in our history, is deliberately or through gross negligence or because of his own twisted personality engaged in treasonous behavior — behavior that violates his oath of office to “preserve, protect and defend the Constitution of the United States.”

DailyKos founder Markos Moulitsas in-your-face article titled "The entire GOP are traitors. It's that simple." is a must-read. He captures the totality of the state of the Republican Party and the President himself.

American traitor Donald Trump’s shameful performance at the Surrender Summit has removed all doubt about where his allegiances lie—believing Russian President Vladimir Putin’s lies over his own intelligence agencies. His slavish performance, akin to a puppy dog desperate for his master’s attention, wasn’t just geopolitically embarrassing, it wasn’t just humiliating to watch as an American, it was also an overt admission that America is now a Russian puppet state. A former RNC chairman and former CIA agent have called Trump’s performance treasonous. A handful of Republican senators have expressed disapproval to some degree or another, while doing nothing more to hold Trump accountable.

Yet for the most part, the Republican Party has dithered between silence and outright surrender in the face of this Russian aggression—aggression that has extended to brazenly murdering allies. And Trump and his Republicans don’t care, and haven’t, since the day that top Republicans Paul Ryan and Kevin McCarty were taped saying that they believed that Trump and other Republicans were literally on the Kremlin payroll. But they got their tax cuts and Supreme Court seats, so what do they care? If they had to surrender their country to their historical boogeyman to enact their agenda, well, it was an acceptable price to make. That is called treason. And most Republicans aren’t even hiding it anymore.

It is an unfortunate day for America. A president that lost the popular vote is turning the country on its head. Donald Trump, our Manchurian candidate today displayed who is in charge of the American Presidency, Russia's Vladimir Putin.