The Trump Effect did not begin with the election of Donald Trump. It peaked with it. All those people who rode the train to its culmination, the election of the instantiation of all that was evil within them, must now live with all shrapnel they left behind. Judgment day is coming sooner than later.

New Jersey school board candidate Rick Jankowski was living within Trump Effect during the period Trump, and the TEA Party made raw discourse vogue. The print media is catching up with what should have been done by all media from the inception of the TEA Party and the radicals that could not deal with the election of Barack Obama. Many are attempting to atone hoping it's not too late, hoping that we can stop the growth of this cancerous relapse approaching metastasis.

The New Jersey Globe exposed the following in a recent article.

A Monroe Township, Gloucester County, school board candidate made a series of racist and homophobic Facebook messages between 2013 and 2016, at times referring to black people as “animals” and “fucking monkeys.”

“So now I watch videos of the ‘protesters’ throwing trash cans and any other items at any white person they see…….time to start firing bullets into these fucking monkeys and send them to their graves,” Monroe school board candidate Rick Jankowski wrote on April 27, 2015.

Jankowski, a union carpenter who has lived in Williamstown, an unincorporated community in Monroe for close to 15 years, did not respond to messages seeking comment sent to his personal and campaign Facebook accounts at 12:36 p.m. and 12:32 p.m. on Wednesday, respectively.

“I’m sorry but I can’t stay quiet any longer…..you goddamn animals in Missouri make me sick! Another black criminal gets killed after assaulting a white cop and you pieces of shit want justice? You are not Americans, you are animals who disgust me. You wonder why there is racism in this country? Get a fucking job and contribute you useless wastes of life instead of constantly committing crims and protesting when you get what you deserve, [sic]” Jankowski wrote on Aug. 18, 2014.

The problem with people like Rick Jankowski is that their rants get traction because they present a plausible argument to those watching an injustice incapable of believing their fellow person could be so evil. Take the following statement on his Facebook wall. 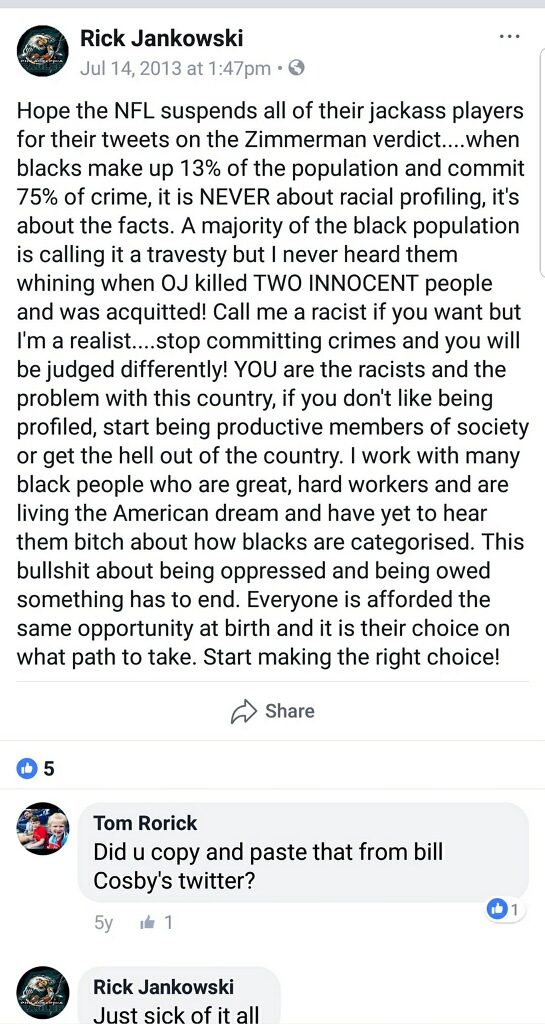 These assertions are lazy and we must always rebut them. As long as we allow people to conflate hue and race to crime then we will never address the real causes.

It is crucial that we not just ignore the promoters of misinformation. It accumulates and repairing the outcomes sets us back and is dangerous for the country. It gave us Donald Trump.