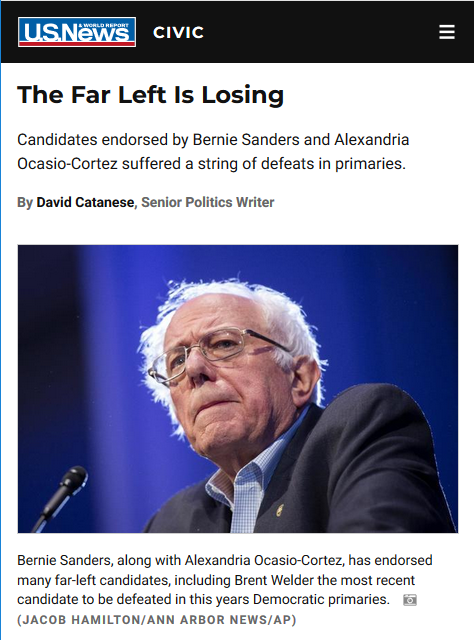 The insurgent left wing of the Democratic Party, sometimes self-identified as democratic socialists and exemplified by rising star Alexandria Ocasio-Cortez, and associated with groups like Bernie Sanders’ Our Revolution, the Justice Democrats and the Democratic Socialists of America(DSA), took some losses in primaries on August 7. These included high-profile candidates like Abdul El-Sayed, a candidate for Michigan governor and Brent Welder in Kansas’s 2nd district, along with losses by Cori Bush in Missouri’s 1st district. Following the losses, corporate media outlets were quick to declare the Democratic left wing dead in the water: 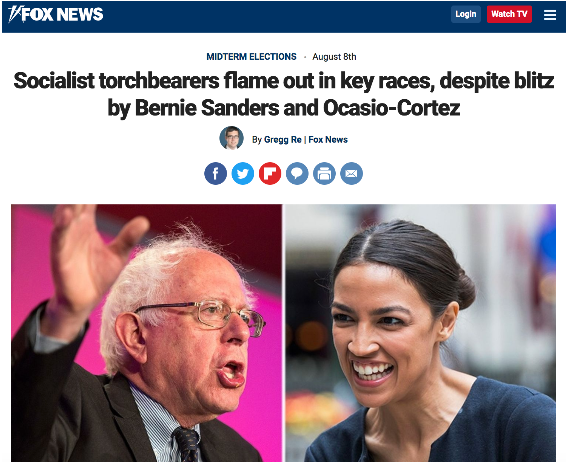 Despite these eager obituaries, there were also plenty of wins for insurgent Democrats on August 7. Democratic Socialist and Our Revolution candidate Rashida Tlaib won her primary for the House seat in Michigan’s 13th district; since she is running unopposed in the general election, she will become the first Palestinian-American woman in Congress. James Thompson also wonthe Democratic nomination in Kansas’s 4th district, and will face Ron Estes in a tough race in a deep-red district. Sarah Smith came in second in Washington’s 9th district top-two primary, and will face incumbent Democrat Adam Smith in the general election. Progressive candidates also earned big wins in a number of state and local races, and Missouri voters overwhelmingly approved a ballot measure to overturn the state’s anti-union right-to-work laws.

There were losses as well as wins in the August 14 primary, like Kaniela Saito Ing in Hawaii’s 11th district. Yet the major wins on August 14 made the premature obituaries of Sanders’s candidates look like wishful reporting. 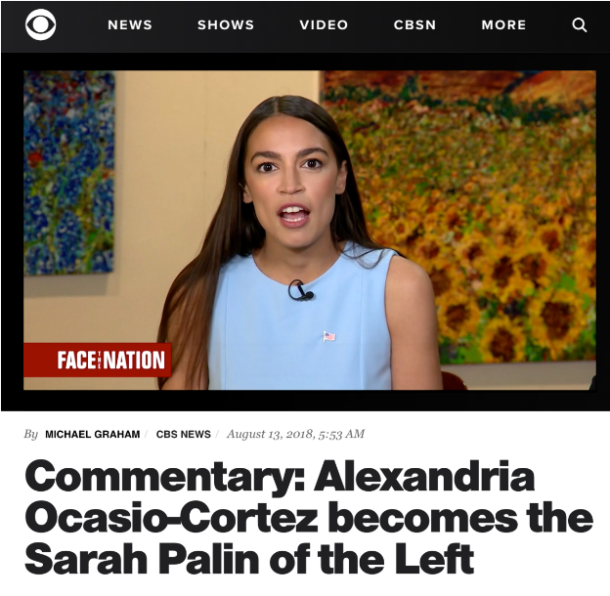 Looking at the actual mix of success and failure by insurgent Democrats, it’s hard not to conclude that they have received inordinately skeptical treatment by corporate media, particularly receiving much more negative press than the 2010 Tea Party insurgency in the Republican Party, which Sanders’ movement has often been compared to. CBS News (8/13/18) even called Ocasio-Cortez the “Sarah Palin of the left.”

But rather than comparing coverage of the Sanders wing of the Democratic Party to that given the successful but heavily astroturfed Tea Party, a more apt contrast might be to the way media have dealt with the large-scale electoral failures of the establishment wing of the Democratic Party. The Obama-led Democratic Party leadership has been largely spared media scrutiny of its electoral record, despite losing more offices in Obama’s two terms than any president since Eisenhower, including 69 House seats, 14 Senate seats and nine governorships, not to mention losing a whopping 968 state legislature seats, the most of any two-term president. Many pundits in the corporate media actually rushed to defend Obama’s tenure, insisting that it’s normal for two-term presidents to lose governorships and congressional seats for their party–which is true, though Obama set records for such losses.

When one takes a historical look at socialism in the United States, Sanders’ insurgency seems to be doing remarkably well: The previous high point of socialism in the United States was perhaps the early 20th century, when the US elected two Socialist Party congressmembers in 1910 and 1917, and socialist Eugene V. Debs garnered 6 percent of the popular vote in the 1912 presidential election. In the wake of the Red Scare crackdowns that followed both world wars, the US socialist movement has hardly sniffed political power during the Cold War, and has been pretty much nonexistent on the national level over the past 30 years, save Bernie Sanders and former DSA vice chair Ron Dellums, who represented Berkeley in the House of Representatives from 1971–1998.

Even if today’s socialist wing of the Democratic Party hasn’t won every underdog primary race against better-funded centrist opponents, it is apparent that progressives are winning the battle of ideas within the party. Policies such as Medicare for All, free college, student loan forgiveness and jobs guarantees, all formerly considered radical positions, are now expected to be litmus tests in the 2020 Democratic presidential primaries. Even more importantly, they are becoming quite popular with voters: A recent Reuters poll showed that Medicare for All has support from 70 percent of the US electorate, including 52 percent of Republicans, while another 60 percent of the electorate supports free college tuition.

Support for democratic socialism in general is on the rise as well. A recent Gallup poll revealed that 57 percent of Democrats have a positive view of socialism, compared to 47 percent who view capitalism favorably; socialism gets the approval of a majority of millennial voters. It’s not necessarily clear what “socialism” means to those who like it, with possibilities ranging from New Deal–style social programs to worker-controlled production. Still, it’s safe to say that a majority of Democratic voters want an anti-corporate party that represents the interests of the working class and minorities against the rich, despite whatever the media say about the electoral success or failure of the politicians that embody such policies. 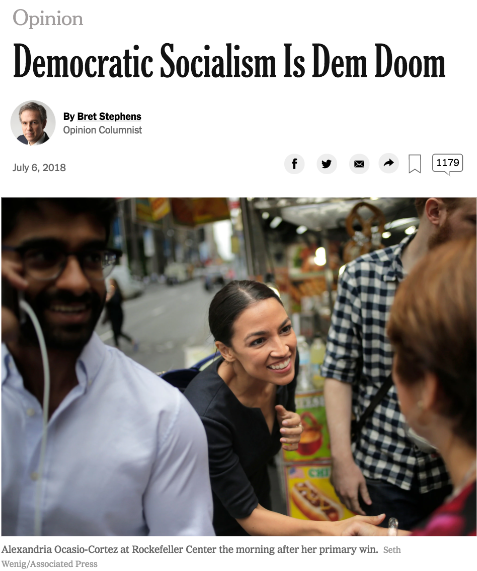 With this recent ideological shift, the specter of a socialist bogeyman has jolted the media into crisis-management mode. Conservative news stations like Fox News scream on the daily about how scary democratic socialism is, while print outlets continue to churn out anti-socialist hit pieces:

The most common argument in these pieces is to yell that the US can’t afford social programs like Medicare for All or free college, evidenced by pieces such as “Democrats’ ‘Socialism’ Will Bury Us in Debt We Won’t Be Able to Get Out From Under” (MarketWatch, 7/11/18). For her part, Alexandria Ocasio-Cortez responded to such critiques by calling out the hypocrisy of whining about costs for universal healthcare in a CNN interview (8/9/18): “When it comes to bills for tax cuts and unlimited war, we seem to invent that money very easily.” 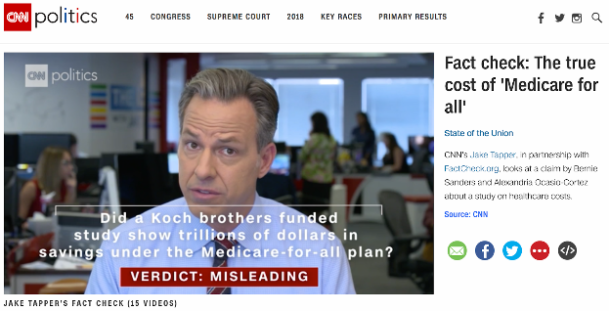 Yet CNN’s coverage of her comments parroted the same old line: that Medicare for All would cost an eye-popping $37 trillion, at least according to research by the Koch brothers–funded Mercatus Center. However, like most outlets afraid of big spending that doesn’t involve tax cuts for billionaires or bloated military budgets, CNN failed to even mention that the $37 trillion figure is the cost estimate for Medicare for All over a 10-year period, and that this figure is actually $2 trillion less than projected US healthcare costs under the current system over the same period (FAIR.org, 7/31/18).

Of course, this isn’t the first time Sanders or his socialist allies have received irrational opposition from corporate media. As FAIR’s Adam Johnson (3/8/16) reported during the 2016 presidential primaries, the Washington Post at one point ran 16 negative articles about Sanders in a 16-hour period. Sanders’ plans for Medicare for All have also been subject to disingenuous and incorrect“factchecks” by outlets like CNN and the Washington Post. During her primary run against high-ranking New York Democratic Rep. Joseph Crowley, Ocasio-Cortez at first received barely a peep in the mainstream press, but after her surprise victory was subject to endless profiles and a flurry of attacks by the media, and is now being subjected to demands for public debates from hyper-sensitive right-wing pundits.

Michelle Goldberg of the New York Times (8/9/18), perhaps the only person in the right-leaning Times op-ed lineup who could be considered sympathetic to Sanders’ politics, noted that while insurgent candidates might not have won every primary, the left wing of the Democratic party was nonetheless winning hard-fought victories on the strength of its ideology and electoral pragmatism. Whether left-leaning Democrats fall flat in the midterms or not, their ideas have persuaded America that socialism is a legitimate and popular political movement, and will likely be a strong voting bloc in the next Congress. Whether corporate media choose to acknowledge its relevance or continue its fear-mongering remains to be seen.