Fascism will not come to America all at once. It will come in subtle ways. It will be virtually imperceptible as our freedoms are eroded a little at a time. The frog placed in warm water over a fire waits till it's too late to get out. This Texas story is a classic example.

Texas police decided that they would confiscate a sign of a Texas woman they found offensive because it displayed the GOP in a bad light. Fascism? 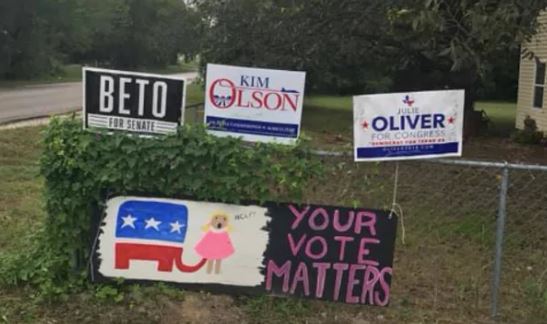 AUSTIN — Marion Stanford expected the political sign she painted to rile up some folks in her small town of Hamilton in Central Texas. But she didn’t expect to end up in a heated Facebook exchange with Texas Agriculture Commissioner Sid Miller, or for the police to show up to confiscate her sign.

The sign features the GOP elephant logo with its trunk up the dress of a female figure, with the word “Help,” next to the phrase “Your vote matters.” Behind it in her yard were campaign signs for Democratic candidates Lupe Valdez, Beto O’Rourke, Julie Oliver and Miller’s challenger, Kim Olson. "Here we have a political party that is using women," Stanford said. "I thought the sign represented what is going on now, and we can't just stand quiet. I wanted to tell people we could stop it with voting."

Stanford said she painted the sign last week after watching Supreme Court nominee Brett Kavanaugh testify about the sexual assault allegations against him.

“That was not Judge Kavanaugh’s daughter,” she said. “The cartoon was made last year by Washington Post cartoonist Ann Telnaes, a Pulitzer Prize winner.”

Stanford received a plethora of offensive calls about her sign after the opponent of one of the candidates she supports, Sid Miller, called out her sign on his Facebook page. It was not long before a form of fascism would emerge.

Stanford said she began to receive phone calls and was harassed on Facebook. Tuesday evening, she said, police came to her house and said they had received complaints. “Police told me to remove the sign or they would take it and would arrest me,” Stanford said. “So I let them take the sign.”

The city manager of Hamilton, which is about 100 miles southwest of Fort Worth, denied that police mentioned arrest or forcibly took the sign. “It’s political season, and a citizen here placed a yard sign that featured a political animal taking an inappropriate position with a young child,” Pete Kampfer said. “A police member visited the owner’s home, and the owner asked the officer to take the sign.”

Kampfer said the city strongly values freedom of speech and the Constitution. The sign is still at the police station. Legal experts said that if police took the sign, the city may have violated Stanford’s constitutional right to free speech.

Sadly, saying the words but not respecting the words are not the same thing. Allowing these seemingly small incidents to percolate throughout our country is tantamount to acquiescing to the slow creep to fascism.