Stephanie Ruhle exposed the lie that Republicans have been telling for decades about jobs. It isn’t like it is a hard truth to prove. Why do Democrats always seem to lack the message discipline to ensure reality sticks in the heads of the masses? Does this not seem like an easy sell? Repeat. Repeat. Repeat with facts and how it affected different group’s personal economies is key.

“The president rolled out a new line for his campaign at a rally last night,” Stephanie Ruhle said. “‘Democrats produce mobs. Republicans produce jobs.’ That’s really catchy. Isn’t it? Well here’s the thing. For ‘facts’ sake, how do the two parties compare when it actually comes to job creation under each president?

Stephanie then proceeded to deconstruct and obliterate the Republican myth that they are the job-creating party. In fact, the data is absolute and proves otherwise.

“Well we have an analysis put together by Democrats on the Joint Economic Committee in Congress,” Ruhle continued. “It compared private-sector job growth under Democratic and Republican presidents going back to Truman and ending with Obama.”

Ruhle then showed the graph that every Republican must see to deprogram them from the lies we’ve all been told ad nauseam.

Job Performance by President and Party 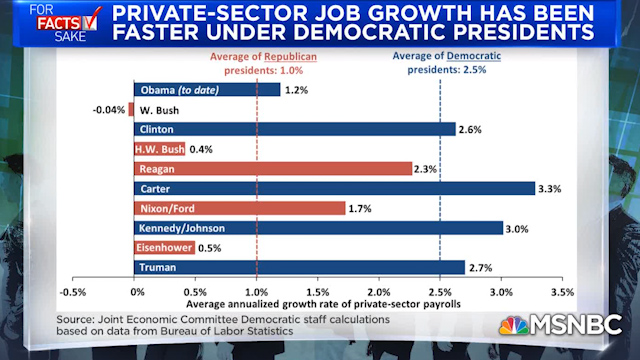 Economic Performance based on GDP 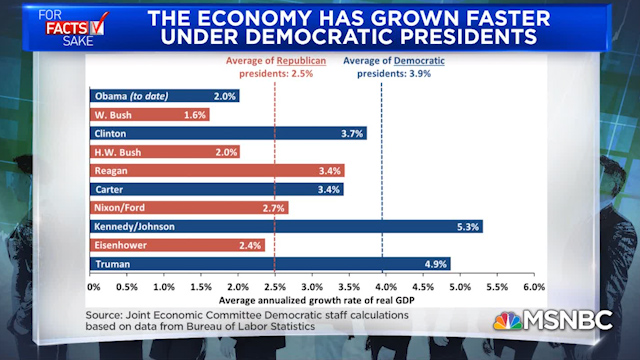 “Blue lines representing our Democratic presidents; red lines for our Republicans,” Stephanie Ruhle said. “And for each a dotted line that shows the average growth for Republicans and Democrats. On average, the rate of job growth was almost two and a half times faster under Democratic administrations than it was with Republican ones. That is according to figures crunched from the Department of Labor looking at the gross domestic product, you know it as GDP, another growth metric to measure the strength of the economy. We can also see substantially better performance under Democratic presidents. Again, our dotted red and blue lines paint a clear picture. On average real GDP has grown about 1.6 times faster with a Democrat in the White House than with a Republican according to figures crunched in the Department of Commerce.

Since Republicans many time balk about sources, Ruhle chose to highlight a paper by outside experts.

“Furthermore,” Ruhle said. “A paper released by the Woodrow Wilson School and Department of Economics at Princeton concluded quote ‘The US economy has performed better when the President of the United States is a Democrat than a Republican almost regardless of how one measures performance.’ So it sounds like Democrats have a branding problem.”

She hits the nail on the head. It is all about branding what Democrats already stand for, promote, and many times attempt to provide.

John Harwood acknowledged that Democrats, in fact, have a branding problem. More importantly, he points out a fact few realized about Mr. Double Talking Trump, our liar-in-chief.

“Democrats do have the branding problem that you mentioned,” John Harwood said. “Republicans, on the other hand, have a data problem and if you want to know who recognizes that, none other than President Trump. In 2004 when President Trump was interviewed on CNN he was asked, ‘Do you think of yourself more as a Republican or Democrat?’ He said, ‘You know it seems like the economy does better under Democrats.’ That’s what those figures show. That’s what the years since then have shown. Of course, President Obama had a better record of net job creation than President Bush. That’s simply the reality of this situation.”

The reality is that this is not new. In 2012 authors Bob Deitrick and Lew Goldfarb wrote the book “Bulls, Bears and the Ballot Box” that identified this reality. Adam Hartung pointed out the book’s conclusions in his article “Want A Better Economy? History says Democrat!” in Forbes.

From this book loaded with statistical fact tidbits and comparative charts, here are just a few that caused me to realize that my long-term love affair with Milton Friedman’s writing and recommended policies in “Free to Choose” were grounded in a theory I long admired, but that simply have proven to be myths when applied!

The “how and why” of these results is explained in the book.  Not the least of which revolves around the velocity of money and how that changes as wealth moves between different economic classes.

I also wrote about this reality in an article titled “Economy Much Better Under Democrats Than Republicans. Why the cover-up?” Why is it that Democrats are unable to plant this truth into the minds of every American. After all, the data is there for all to see and for Democratic Politicians and activists to repeat over and over again.