Those of us who are continually debating our country’s health care flaws seldom personalize the issue in a manner that illustrates the vile inhumanity of our system. At any given time millions of Americans are under stress and duress, While those with a semblance of health insurance security can look from afar or antiseptically, the pain and financial crisis our system create are real.

Meredith Ryan is not a statistic; she represents the future that will be the healthcare ordeal for Americans if Republicans win Midterm 2018. It seems when one gets onto the wrong side of America’s healthcare labyrinth, it is almost impossible to exit.

I wrote about Meredith before. I overheard her in a frustrating conversation with her insurance company a few months ago. I wrote the following then.

Meredith C. Ryan is like the majority of Americans who must intersect with our health care system at some time in their lifetime.. Unless you are lucky to work for a large company with corporate subsidized health insurance, accessing health care is frustrating and sometimes impossible. Meredith cannot wait for Single-Payer Medicare for All to come to fruition. …

Meredith is a Type 1 diabetic. Before the Affordable Care Act, she spent 10 years uninsured. Either the cost of health insurance was too high or they would not insure someone with a preexisting condition. While the Affordable Care Act gave her a new lease on life, its reliance on the market-based private insurance system means it is not only expensive but very inefficient.

“This healthcare system that we built out of pillars of nine million things, nine million different companies is stupid in the extreme,” Meredith said. “Medicare for all will wipe out all of this. … They are selling us a bill of goods and I am tired of it.”

Well, it seems the system is out to get her again. Meredith relays her story of temporarily being on a diabetic sugar low. Her apartment manager caught it and stabilized her with some candy. She then drove Meredith home. It was rainy and wet. As Meredith stepped out of the car, she fell face first on the concrete; She fractured several bones in her face. They gave her two CAT scans and six stitches. She is currently uninsured and left the emergency room with a $2,300 bill. She needed an X-ray for her wrist which she believes may have fractured while attempting to break her fall but does not have the funds to pay for it.

Meredith’s ordeal is typical of the American health care system. At the end of President Obama’s term, the uninsured rate fell to 10.9%, the lowest percentage ever recorded. As Trump came into office, he along with his Republican cohorts began the Obamacare Sabotage. The uninsured rate has since climbed to 12.2% which represents 3.2 million American human beings. 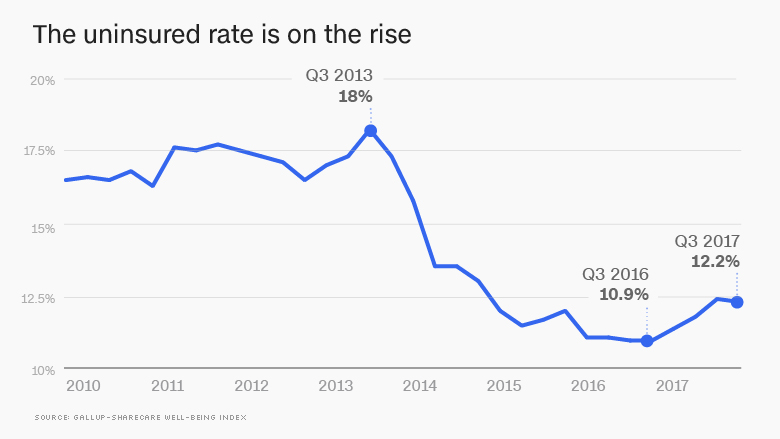 Trump and the Republicans attempt to kill the ACA (Obamacare) by a thousand cuts has consequences. There are people behind each one of the policy changes that Trump and his Republican cabal are affecting.

Texas Republicans by not accepting the Medicaid Expansion to the Affordable Care Act are causing the deaths of 3500+ Texans per year and 14,000 Americans per year. It would have cost the state nothing for the first three years and 10% of the cost subsequently. For ideological reasons, they chose not to do it. In the process, Texans were paying billions for services they did not receive, fiscal irresponsibility. This sick act applies to all the Red States that followed Texas’ lead. Unfortunately, these states continue to lose rural hospitals in droves where the most significant need for the Medicaid Expansion to the Affordable Care Act is. Ironically, Republicans are hurting their base more so than anyone else.

Supporting any Republican in Midterm 2018 is effectively the potential sanctioning of pain, ill-being, and the deaths of family, friends, acquaintances, and neighbors. I do not mean to be hyperbolic with the previous statement, but it is a fact that facilitating the Republican agenda to cripple health care does just that.