CONGRATULATIONS Democrats and Progressives. You won, and you won big. Do not allow any narrative other than one of a big successful fruition of hard-fought campaigns. So celebrate and know the effort was not wasted.

Nationally, we won the House. This is important because Trump is now unable to unilaterally pass policies that hurt the middle-class without a Progressive or Democratic check.

We elected an unprecedented number of women. 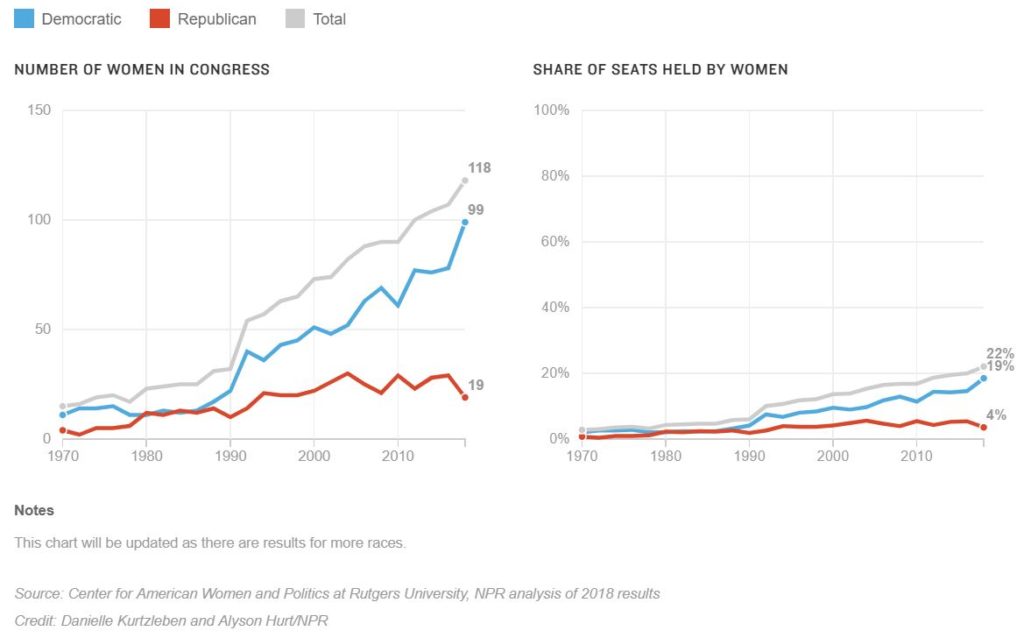 With results still coming in, 95 women have won or are projected to win their House races as of early Wednesday morning, up from the current 84. In addition, at least 13 women won Senate seats. That’s in addition to the 10 female senators who were not up for re-election this year.

Progressives made a statement in Trump’s ethnic-racist America by electing two Muslim women. According to CNN,

A pair of districts in the Midwest will add Muslim women to the ranks of the US Congress for the first time, CNN has projected. Michigan Democrat Rashida Tlaib and Ilhan Omar, the Minnesota Democratic-Farmer-Labor Party’s nominee, will secure their respective seats in strongly Democratic districts following primary victories earlier this year that effectively decided their races.

Democrats lost a lot of ground in statehouses under Barack Obama’s presidency. In the 2018 midterms, they started to get some of it back — but they’ve still got a lot of catching up to do. Democrats took control of six state legislative chambers nationwide in Tuesday’s midterm elections, according to the National Conference of State Legislatures. Voters in 46 states cast their ballots for more than 6,000 state legislators on Tuesday. In multiple states, legislatures either flipped from Republican to Democratic-controlled or, in one state, went to Democrats from a split chamber.

Three Red States demanded the Medicaid Expansion to Obamacare. According to the Washington Post,

Citizen power propelled the biggest expansion of Medicaid in heavily Republican states since the early years of the Affordable Care Act, with hundreds of thousands of poor and vulnerable residents standing to gain health coverage as a result of Tuesday’s elections. Voters in Idaho, Nebraska and Utah approved ballot initiatives to include in their Medicaid programs adults with incomes of up to 138 percent of the federal poverty line. The results accomplish a broadening of the safety-net insurance that the states’ legislatures had balked at for years.

Several states voted in favor of recreational marijuana and an increased minimum wage. According to The Verge,

After our step backward with Donald Trump, we have taken many steps forward. Our mainstream media continues to “group think” and work as a staged production. They decided that Stacey Abrams, Andrew Gillum, Beto O’Rourke, and Bill Nelson were the bellwether for Midterm 2018. We would have loved for every one of them to win. But in the grand scheme of things those were acceptable and probable losses.

I live in Harris County Texas. While Beto O’Rourke lost our statewide race by a few percentage points, his energy activated our Latinos, Millennials, GenZs, and others for a clean sweep of virtually all positions of consequence in the county. These positions have a direct impact on every Harris County resident’s everyday life. As an example of our success in this very diverse county, the most powerful politician in Harris County is now Lina María Hidalgo, a woman, a Latina, an immigrant from Colombia who paid her dues with her grassroots service. (I’ve interviewed her several times.)