Churches, specifically the Southern Baptist Church, have spent decades condemning others and moralizing. Recently the head and pastor of the Second Baptist Church, Ed Young, had the gall to call Democrats godless even as many are in his pews.

The Houston Chronicle has recently completed a three-part series detailing cancer that lives within that church. Contrary to exposing their sex abusers, shining the light to ensure the could not easily repeat their crimes, the abuse of faith turned into an “Offend, then repeat” series. 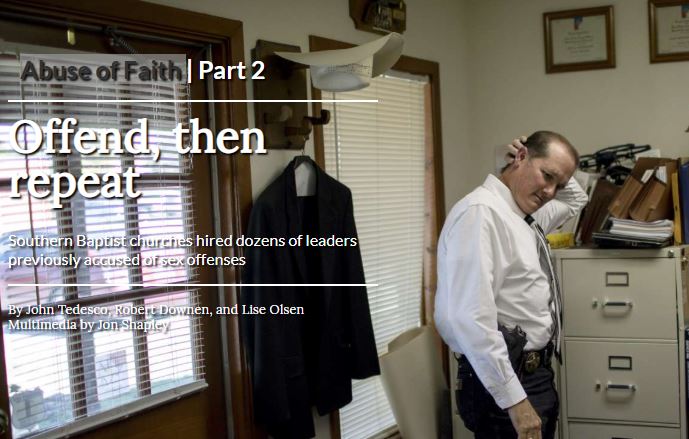 Doug Myers was suspected of preying on children at a church in Alabama — but he went on to work at Southern Baptist churches in Florida before police arrested him. Timothy Reddin was convicted of possessing child pornography, yet he was still able to serve as pastor of a Baptist church in Arkansas.

Charles Adcock faced 29 counts of sexually assaulting a 14-year-old girl in Alabama. Then he volunteered as a worship pastor at a Baptist church in Texas. The sordid backgrounds of these Southern Baptist ministers didn’t stop them from finding new jobs at churches and working in positions of trust. They’re among at least 35 Southern Baptist pastors, youth ministers and volunteers who were convicted of sex crimes or accused of sexual misconduct but still were allowed to work at churches during the past two decades, an investigation by the San Antonio Express-News and the Houston Chronicle reveals.

Some were suspected of misconduct but were allowed to leave quietly and work elsewhere. Others had been arrested, had criminal records or even had to register as sex offenders but later found jobs at Baptist churches. All the men worked at times for churches in the Southern Baptist Convention, the largest coalition of Baptist churches in the United States. The SBC has rejected efforts to establish a registry to track sexual abuse cases and prevent churches from hiring predatory pastors.

The Southern Baptist Convention according to the articles, refuses to create a registry of sexual predators. As such, as read from these appallingly sad stories, many of these pastors and religious figures roam the Southern Baptist arena like predators searching for their next kill. 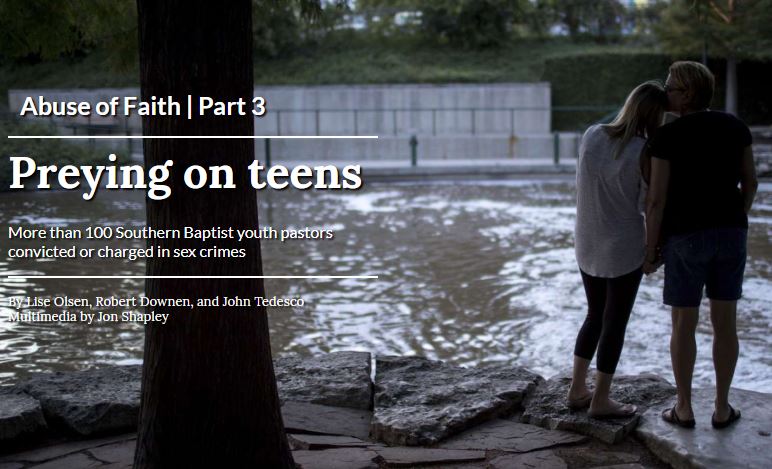 More than 100 Southern Baptists described as former youth pastors or youth ministers are now in prison, are registered as sex offenders or have been charged with sex crimes, the newspapers found. Their most common targets were teenage girls and boys, though smaller children also were molested, sometimes in pastors’ studies and Sunday school rooms.

“You can’t let your guard down,” said Amanda Griffith, a federal prosecutor in San Diego who has handled dozens of sex crime cases, including those involving predatory youth pastors. “There’s the belief that church is sacrosanct, but this can happen anywhere.”

Foster toted chicken nuggets to school lunchrooms and delivered passionate sermons as part of his ministry. But behind the scenes, he was prolific in his flirtations, using cellphones and laptops to message multiple girls at Second Baptist and later at a different church.

He asked girls as young as 12 for graphic details about “temptations.” He shared his sexual fantasies and masturbated online, displaying himself via social media webcams or describing his activities in texts. He urged his favorites to send their own explicit images and to visit the suburban tract home where he lived alone, Harris County court records show.

Second Baptist quietly fired him in 2010 after receiving complaints about lying and other inappropriate behavior, court records show. Church members and employees were among those who pointed out problems before his dismissal.

But church leaders did not inform youth group members and parents that Foster had been fired or why. Nor did they tell leaders of another church, the Community of Faith Church in Cypress, a non-SBC church that hired Foster to run its youth group in 2011. He found more targets there, court records show.

Interestingly, these moralizers are trying to dictate to America what its values should be. They neither have the standing, the morals, nor the ethics to do so. They have proving themselves to be just religious institutions extracting money and pleasure from those who are coerced into being a part of their game.