It is hard to believe this one especially with the managers of this Buffalo Wild Wings restaurant seemingly complicit in appeasing one customer over another. The danger of the Trump Effect is the normalcy it brings to a certain degeneracy.

Mary Vahl posted her story on Facebook. She said she does not normally do so but felt this warranted exposure. Here is her story as posted.

PSA: I usually don’t post these types of things but we think people need to be aware of the situation.

Last night (10/26) we went to the Buffalo Wild Wings on 75th & 59 with a party of 18. Upon being greeted, my husband Justin told the host that we had a party of 15. After he realized that he miscounted, my husband walked over to the tables to where the host was setting up and told him we actually had 18. A couple minutes went by and the host went up to my husband and asked “what race are you guys?” My husband asked him why it mattered and the host responded that a table with 2 of their “regular customers” were next to where we were to be seated and he didn’t want us sitting there because he’s “racist.” “Us” being a group of minorities, mostly consisting of African Americans…. so of course, we don’t give him the satisfaction and told the host we’ll sit where they set us up. 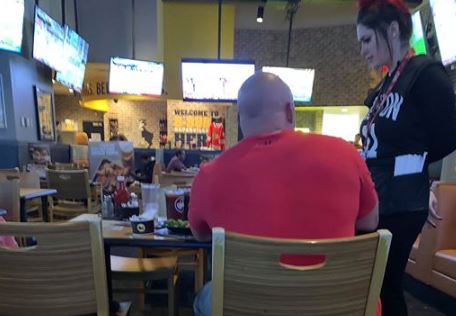 We knew right away who it was because the guy was staring at us the entire time and giving us looks as we were being seated. As we sit, our waiter greets us and gets some drinks & app orders started. After a few minutes we notice that an employee is talking to the “racists table” and approaches us and communicates to Justin and Marcus “these seats are reserved and we will have to move your group.” The guys politely tell him that we’re not moving and request to speak to the manager in which he says he’s one of the managers (John). Meanwhile, we’ve told our waitress what was happening and she makes a comment indicating that she’s already aware he’s a racist because he’s a regular. How is an establishment ok with serving people who try to control which types of people sit around them?! It was not ok that that a person of management was willing to move 6 adults and 12 children versus 2 grown adults who are uncomfortable sitting by black folks!! At this point we’re uncomfortable for being put in this situation. The service manager (Hannah) now approaches us, after already speaking to the other table, to say that it was told to her that our seats were already reserved by a party of 18 that called in. Hmm, could that be us?! Although we walked in with no call, if these tables were in fact reserved there would have been a reserved sign on the table. At this time management is giving every excuse for their “misunderstanding” because John decides to change his story in front of his superior. We call him out on his words and tell him he didn’t “think the tables were reserved” and blatantly told us they WERE reserved and we HAVE to move our group.

It’s apparent that this staff knows these two individuals as they were playful with conversation and took their time to make our experience difficult. In 2019, this type of behavior should not be accepted because of certain views. If you don’t want to sit next to certain people in a public restaurant then you should probably eat dinner in the comfort of your own home. A moment to hangout with a group of friends after a birthday party, turned into a discussion with our young impressionable sons about how we didn’t get kicked out, but willingly CHOSE to leave because of the unfair treatment we were being given. This Buffalo Wild Wings location has lost our business indefinitely. Thank you to the Hootersfor serving our group and the patrons of Hooters for not being close-minded people that would ruin the night of others. #closedmindedpeoplewillnotprosper

This is a classic case of what I call the Trump effect. Irrespective of what's in someone's heart, most know that behavior of this sort is unacceptable. Corporate employees would know not to risk doing anything that could be construed as discriminatory.

Subsequently, the Chicago Tribune did some digging. The local Buffalo Wild Wings restaurant directed inquiries to the corporate communications team.

“We take this alleged incident very seriously and are conducting a thorough, internal investigation,” Kudlata said in the email. “We’re in direct communication with the guest to understand their account of what happened and to offer our deepest apologies for any unacceptable behavior.”

It is also clear the managers lied to the aggrieved guests about someone having had a reservation. A Naperville reporter called the Buffalo Wild Wings restaurant and was told they don't take reservations.

PDR left a message with the Vahls requesting an interview. This post will be updated if granted.