Medicare For All continues to poll way above 50%. Right now we are still in the shock phase of the COVID-19 pandemic. But as people get through the fog of this catastrophe EVERYONE will see skyrocketing healthcare bills and exploding insurance rates. The person who gets to Medicare for All (or whatever it is called) first will win.

For those who believe hate for Trump will supersede one's personal economy, keep dreaming. Those who are politically apt, know that Trump's promises mean nothing. That said, most people are not politically apt nor or they difficult to convince if one person says they will give them healthcare while the other one vacillates during a pandemic. Should I remind you that Americans buy bottled water solely based on marketing when most tap water is just as good and sometimes better?

So Biden better, get with the program and start telling people how he will make their lives better. Specifically, he needs to talk in the now that addresses people's problems just like the government is socialistically taking care of corporations as we speak. Use the pandemic as your cover to do the morally and economically responsible thing now. You will win over Bernie, Trump, Yang, Gabbard, Stoyer, and Elizabeth Warren's voters sitting on the sideline in droves.

Poll: 69 percent of voters support Medicare for All | TheHill 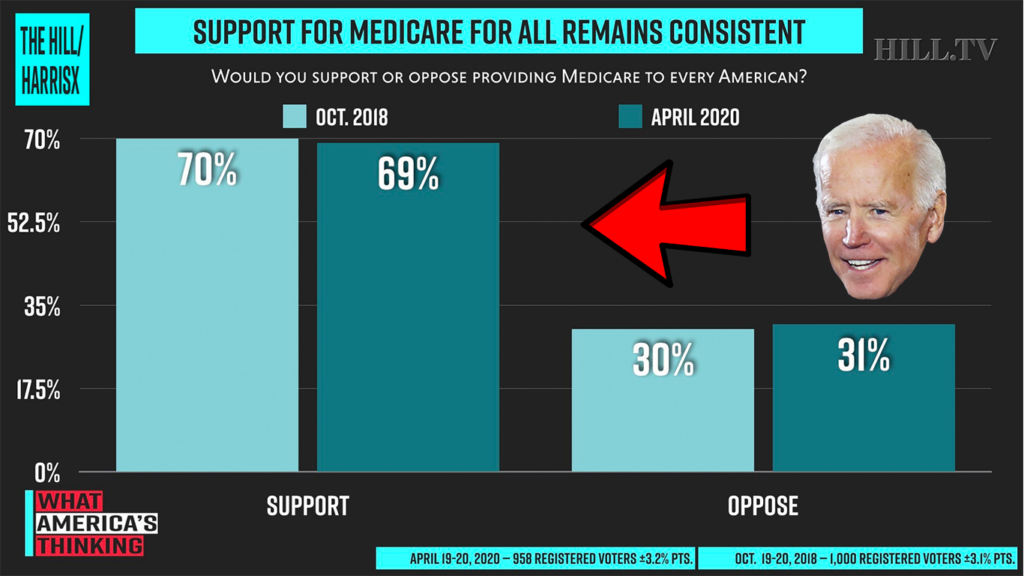 Support for Medicare for All has remained consistently strong over the past two years, according to a new Hill-HarrisX poll.

Sixty-nine percent of registered voters in the April 19-20 survey support providing medicare to every American, just down 1 percentage point from a Oct. 19-20, 2018 poll, and within the poll's margin of error.

Popularity for Medicare for All grew slightly among Democratic voters, with a 2 percentage point increase from 2018.

Support among independent voters was steady at 68 percent.

However, support among Republican voters declined 6 percentage points over the course of two years, from 52 percent support in 2018 to 46 percent in 2020.

This is consistent with recent data from the Kaiser Family Foundation which found Republican support for a single payer system has declined over time.

Progressive lawmakers have been pointing to the coronavirus crisis to make a case for the need for Medicare for All as millions of Americans are kicked off their employee-based health insurance due to the economic fallout of the pandemic.

Source: Poll: 69 percent of voters support Medicare for All | TheHill