While our inept president and his son-in-law Jared Kushner are trying to mislead Americans, it is imperative that we all understand the truth. This type of disruption no matter the cause cannot recover quickly. Sadly, we are entering a depression and unless we use all the features of Modern Monetary theory, Americans and the rest of the world will feel maximal pain.

If the pandemic isn't mitigated we are looking at a huge reduction in food production causing starvation. Worse, if we do not start pumping money to farmers, they will not grow enough.

Before we get into the death spiral of, an extended depression, we have got to force our politicians to inflate the money supply. This is not the time for austerity or conservative foolery. 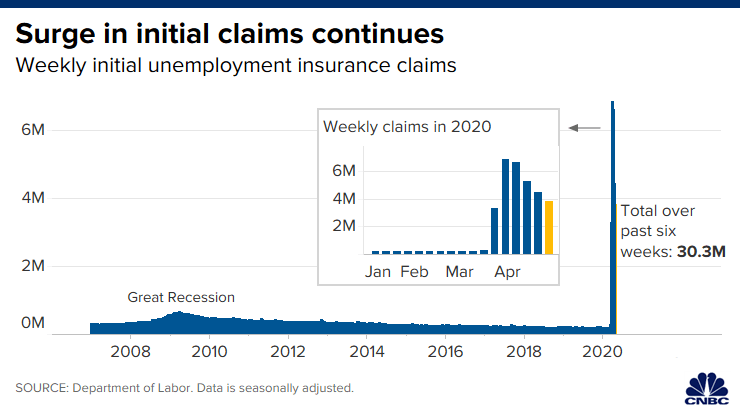 First-time filings for unemployment insurance hit 3.84 million last week as the wave of economic pain continues, though the worst appears to be in the past, according to Labor Department figures Thursday.

Economists surveyed by Dow Jones had been looking for 3.5 million.

Jobless claims for the week ended April 25 came in at the lowest level since March 21 but bring the rolling six-week total to 30.3 million as part of the worst employment crisis in U.S. history. Claims hit a record 6.87 million for the week of March 28 and have declined each week since then.

The four-week moving average, which smooths volatility, jumped to 13.3 million, an increase of 3.7 million from the previous week’s average.

The surge in unemployment has come amid efforts to contain the coronavirus spread. While some states and municipalities have begun bringing their respective economies back online, much of the key U.S. infrastructure remains on lockdown.