Donald Trump claims to be the jobs, jobs, jobs, president. He touts a large employment uptick. But it is a fraud that The Lincoln project exposes.

The Price We Pay For Trump’s Inadequacy | The Lincoln Project 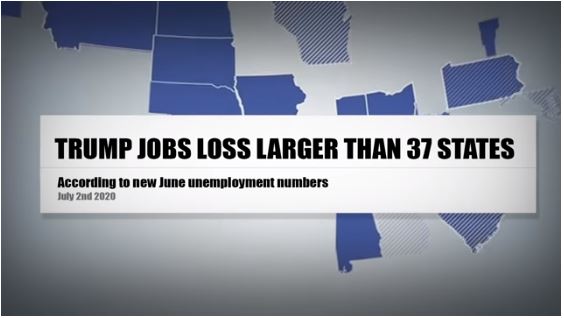 July 5, 2020 - The Lincoln Project today released their latest ad, “Historic”, highlighting the staggering levels of unemployment amidst the global COVID-19 pandemic, plaguing both its citizens as well as the U.S. economy.

Obama economist explains why Trump numbers may seem to soar but it really is not a real surge.

This pain of lost employment cuts through gender and race—with men and women, African Americans and Hispanics alike, all experiencing significant job loss.

Reed Galen, co-founder of The Lincoln Project said, “Every American right now is asking themselves, ‘Am I better off than I was four years ago?’ With 8 million fewer Americans working today than when Donald Trump first took office, we know the answer.”

“Millions of hardworking Americans are facing looming evictions, past due bills, and an uncertain job market, while the President continues to boast about the NASDAQ on Twitter. He’s completely out of touch.” Galen continued.

With every other wealthy nation on Earth reopening and having contained this virus, it’s obvious Donald Trump completely mishandled our response to the pandemic. He politicized masks, went out of his way to downplay the seriousness of the virus, likening it to the flu. He even called it a hoax.

How many people have died due to his negligence? How many jobs and small businesses are never coming back because of his lack of leadership?

And now, coronavirus cases are on the rise, stalling state re-openings, and we continue to have an Executive branch that’s failed to deliver a clear plan of action. So, when the country is asking if we can afford four more years of Donald Trump, the answer is clear: No.

Source: The Price We Pay For Trump’s Inadequacy | The Lincoln Project