What more do Trumpsters need to learn about their fuhrer to jump ship? Even his sister & niece think he is despicable and now this.

Trump: Americans Who Died in War Are ‘Losers’ and ‘Suckers’

The president has repeatedly disparaged the intelligence of service members, and asked that wounded veterans be kept out of military parades, multiple sources tell The Atlantic. 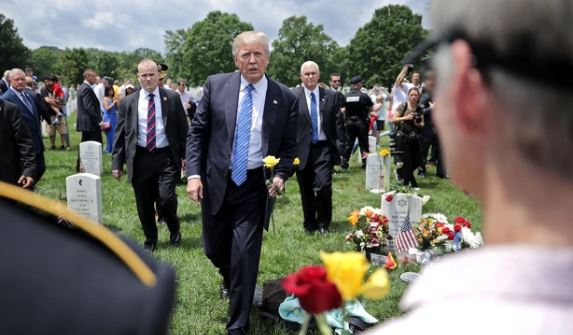 When President Donald Trump canceled a visit to the Aisne-Marne American Cemetery near Paris in 2018, he blamed rain for the last-minute decision, saying that “the helicopter couldn’t fly” and that the Secret Service wouldn’t drive him there. Neither claim was true.

Trump rejected the idea of the visit because he feared his hair would become disheveled in the rain, and because he did not believe it important to honor American war dead, according to four people with firsthand knowledge of the discussion that day. In a conversation with senior staff members on the morning of the scheduled visit, Trump said, “Why should I go to that cemetery? It’s filled with losers.” In a separate conversation on the same trip, Trump referred to the more than 1,800 marines who lost their lives at Belleau Wood as “suckers” for getting killed.

Belleau Wood is a consequential battle in American history, and the ground on which it was fought is venerated by the Marine Corps. America and its allies stopped the German advance toward Paris there in the spring of 1918. But Trump, on that same trip, asked aides, “Who were the good guys in this war?” He also said that he didn’t understand why the United States would intervene on the side of the Allies.

Trump’s understanding of concepts such as patriotism, service, and sacrifice has interested me since he expressed contempt for the war record of the late Senator John McCain, who spent more than five years as a prisoner of the North Vietnamese. “He’s not a war hero,” Trump said in 2015 while running for the Republican nomination for president. “I like people who weren’t captured.”

Source: Trump: Americans Who Died in War Are ‘Losers’ and ‘Suckers’ - The Atlantic