Many economists and writers have told the undeniable truth for some time. The economy does almost twice as good under Democratic presidents.

This is not new. We have written about the economy doing better under Democrats before. In fact, Stephanie Ruhle did a great segment about Democrats creating more jobs than Republicans since Truman. We have blown up the myth about which party grows government spending vs. growing American’s income.

One would have thought that this report would have gotten more coverage. I woke up to my daily newsletter from the Washington Post and was drawn to the title, “Why Are Republican Presidents So Bad for the Economy?” The opinion piece pointed to the fact-based substantive article titled “Blue vs. Red Economic Records” that everyone should read.

The economy has fared far better under Democrats. The gap, as one academic paper puts it, is “startlingly large.” Here are the headline numbers: 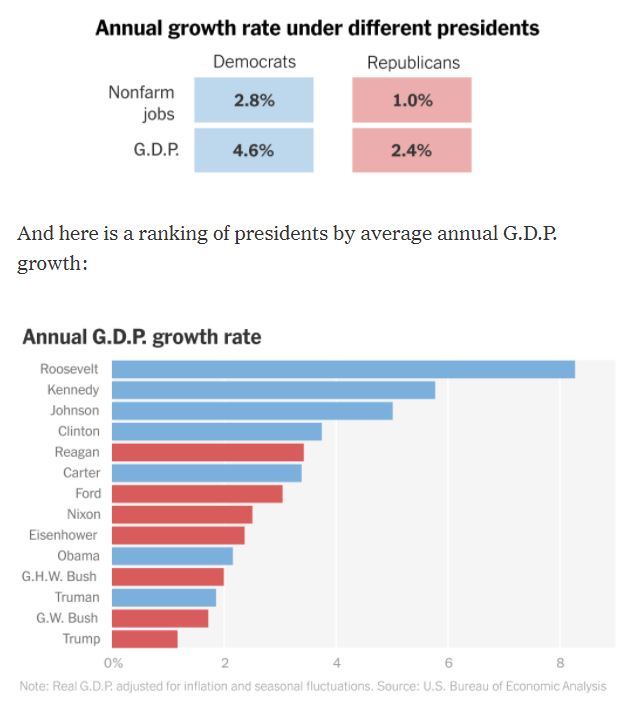 We must spread this type of information widely in many forms. It will reach enough people to make a difference on the other side.

President Joe Biden is putting together a $1.9 Billion COVID and stimulus package. It is necessarily big. It includes direct payments to Americans to both help their financial situation and stimulate the economy.

So what is the problem? Republicans want a much smaller package. They continue to be anathema to pouring money into the poor and middle-class, people who will spend immediately to create economic activity. Ironically, these are the people that generate a vibrant economy.

Republicans, of course, continue to believe solely in tax cuts. They were completely unconcerned about ballooning the deficit with their Trump’s tax cut scam.

The past is prologue. Republicans must have no veto power over any economic solutions Progressives and Democrats produce.