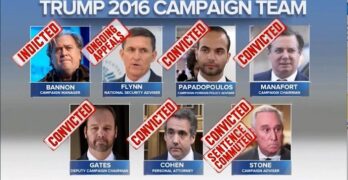 Chuck Todd shocked Trump’s spokesman by pointing out that a lot of people who worked closely with the president have been convicted. Here is the exchange. Chuck Todd: I want to put up this image here. Quite a few people who were involved in the Trump campaign in 2016 have had some issues with the […]

From “Dancing With The Stars” with hopefully “Dancing With The Inmates”. Tom Delay represents one of the lowest forms of political deviancy that this country has seen. His corrupt process of influencing Texas redistricting as well as the fraudulent manner he raised money has been unparalleled until this year’s Karl Rove. The very citizens that […]