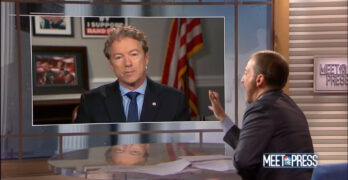 Rand Paul took such command of the interview with Chuck Todd that Congressman Jim Himes (D-CT) had to scold Todd after saying he needed to “de-combust” his head after listening. Chuck Todd’s interview with Rand Paul was an embarrassment not only for Todd but for the corporate mainstream media. It is clear that the tepidity […]