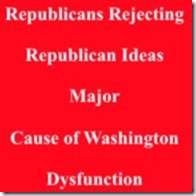 It is easy to throw all politicians in the same boat when describing the gridlock and dysfunction that is afflicting Washington today. The simple fact is that it isn’t so. Thomas Mann and Norman Ornstein wrote about it in their book “It’s Even Worse Than It Looks: How the American Constitutional System Collided With the New Politics of Extremism” that details Republican intransigence. MSNBC’s Chuck Todd had a very good interview with them, where they surprisingly got the opportunity to lay out the fact that over the last few years Republicans have been the most responsible for the chaos in Washington.

While laying the blame mostly on Republicans for the current state of the body politic may seem partisan, facts lead to that conclusion without a shadow of doubt. What is important is for those who are telling and informing about America’s political story, that they are not be tempted to give a semblance of balance or false equivalences to seem non-partisan. The facts should lead to the truth. Truth will allow Americans to elect those that will really work for them.

E.J. Dionne Jr. wrote a piece today, “Republicans rejecting their own ideas” in the Washington Post that does just that. He uses the Affordable Care Act (Obamacare) as the example that proves the case.

Mr. Dionne: Conservatives once genuinely interested in finding market-based ways for the government to expand health insurance coverage have, since the rise of Obamacare, made choices that are dysfunctional, even from their own perspective.

President Obama took the ire of Liberals for ensuring not only that health insurance was market based, the most inefficient manner to pay for healthcare, but even acquiesced to removing a public action that would have proving the market based portion a failure.

Mr. Dionne: Start with the decision of the vast majority of Republican governors to refuse to set up the state insurance exchanges required under the law. The mechanisms would allow more than 20 million Americans to buy coverage. They were originally a conservative idea for large, trustworthy marketplaces where individuals and families could buy plans of their choice.

Many liberals preferred a national exchange, in which the federal government could institute strong rules to protect consumers and offer broader options. This was the path the House took, but the final Senate-passed law went with state-level exchanges in deference to Republican sensibilities.

Republican governors’ refusal to setup health exchanges simply due to it being a part of Obamacare is simply causing it to be federally implemented. This is exactly what Liberals prefer, as it is more efficient and it enforces stricter rules to protect middle class Americans. Republicans’ rejection is a rejection of their own ideas and a support for bigger federal government.

Mr. Dionne: Their most outrageous move was the big lie that the original health-care bill included “death panels.” This would have been laughable if it had not been so pernicious. The provision in question would simply have paid for consultations by terminally ill patients — if they wanted them — with their physicians on their best options for their care. Few things are more important to the future of health care than thinking straight about the costs and benefits (to patients and not just the system) of end-of-life treatments. For those of us who oppose physician-assisted suicide, it’s urgent to promote, rather than block, serious, moral and compassionate discussions of the difficult issues raised by high-tech medicine.

A large percentage of the healthcare dollar is spent near death. Allowing patient and family paid counsel on the benefits of expensive useless care is warranted, and would normally be considered a fiscally responsible and humane policy. Yet, Republicans with the aid of a negligent media gave the “death panels” fallacy false validity. This is the media failure Thomas Mann and Norman Ornstein spoke about.

Mr. Dionne: Or take the health-care law’s creation of the Independent Payment Advisory Board, known as IPAB. It’s a 15-member body charged with finding ways of cutting the costs of treatment under Medicare. Congress would have the final say, but through a fast-track process. Yet the ink was barely dry on Obama’s signature of the Affordable Care Act (ACA) when a group of Republican senators introduced what they called the Health Care Bureaucrats Elimination Act, to get rid of IPAB. Thus did an innovative effort to save money meet with a slap in the face. Conservatives barely acknowledge other cost-saving experiments in the ACA.

If the country is to move forward, it is imperative that hypocrisy be called out. It does not matter if the preponderance of said hypocrisy is on one side. The country is about to fall off a cliff because for too long, balance and false equivalencies have ruled the political narrative as opposed to truth.