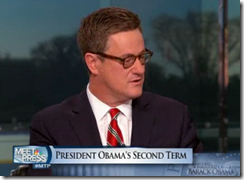 There are many Real Republicans starting to speak out against the intransigence and irrelevance of the Republican Party. Joe Scarborough has joined the likes of Colin Powell who gave a scathing rebuke of the party on Meet The Press, Col Lawrence Wilkerson who said his Party is full of racists, and Jon Huntsman who said the Republican Party is devoid of a soul.

Joe Scarborough said The GOP is getting smaller and smaller. He said that the GOP keeps pushing itself closer and closer to the cliff. He said that William Buckley rebranded Conservatism by going after Ayn Rand, the John Birch Society, and George Wallace. He illustrates how far Right the party has gone given that many of them now consider Ronald Reagan a RINO, a Republican in name only.

He continued by saying he made a mistake over the past month when he stated Republicans won a majority in the house. He acknowledged that it was the cheating of the gerrymandering process that allowed a Republican Majority since they actually got less votes than Democrats.

One would think that the message would be getting through, however Tea Party Wing of the Republican Party continues their continual attack on  any Republican that breaks rank as they did when Colin Powell spoke out. They are even considering modifying how the electoral college allocates its votes to make it possible for them to win with a minority of votes.

It is ironic that the party that wraps itself in the constitution and freedom would at all cost attempt to change the rules of the game. This change would diminish the rights of the majority in order to allow the few with views disparate to real American values, the power to rule.