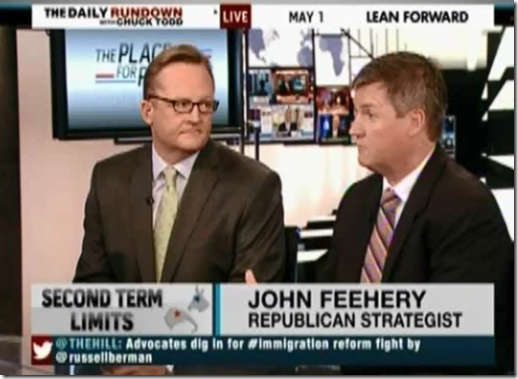 Today Chuck Todd of MSNBC’s The Daily Rundown was doing some political analysis on the President’s press conference with Former White House Press Secretary Robert Gibb and Republican Strategist John Feehery. They discussed the seemingly powerless president mostly because of Republicans’ inability to work with him. The following dialogue was amusing but rather sad because the current political stalemate affects millions of poor and middle class Americans.

Chuck Todd: This idea that there is not, you know the president you say look powerless, you say the Republicans don’t fear him, yet they don’t seem to have a cohesive strategy or agenda. There was a political article this morning about Kevin McCarthy and Eric Kantor, numbers 2 and number 3 in the house Republicans and it is clearly one of the sides decided to leak something about this meeting that they were fighting and disagreeing on a strategy for instance on how to deal with healthcare.

John Feehery: I love those stories that leaked out on internal Republican….. I think that leadership is frustrated; they are frustrated with each other.  And they are also frustrated with the fact that out of the house they really can’t pass gas. It’s really been one of those situations. [Funny chatter]  They just don’t have the votes. It’s not a leadership problem it’s a “follow ship” problem.

That over 90% of Americans wanted more gun safety with the institution of comprehensive background checks and that could not get passed is shameful. That changes were made to the sequester only to remove the inconvenience it caused air travelers (mostly the affluent) and politicians while leaving “meals on wheels”, cancer therapy, and many other programs that affect the poor and middle class without funding is shameful.

Middle class America, Poor America, and all those affected are starting to mobilize. Yesterday Senator Kelly Ayotte of New Hampshire was confronted by the daughter of the slain principal at Sandy Hook Elementary School for her no vote on background checks. This is just the beginning. John Feehery will soon realize that while they “can’t pass gas”, they will be simply passing through Congress till thee next election if they don’t start representing we the people.